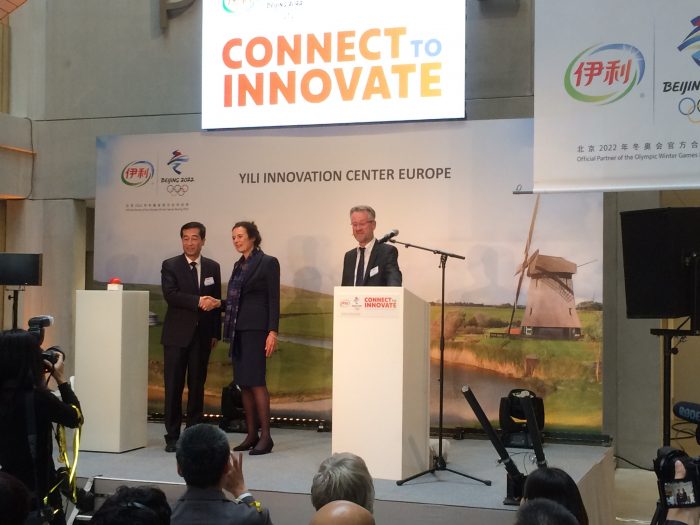 On 12 September, Yili, the largest dairy company in Asia, opened its new Innovation Center Europe in the Netherlands. The new facility is located in the PlusUltra building on the campus of Wageningen University and Research. From here, Yili will coordinate its European R&D activities.

The opening event carrying the theme ‘Connect to Innovate’ was attended by a large Chinese delegation and  international representatives from over 40 universities, knowledge institutes and companies.

The new center replaces Yili’s original European Innovation Centre which was opened in Wageningen, the Netherlands in 2014. It was the first foreign innovation centre of the Chinese dairy sector, and was set up with the aim of expanding and strengthening cooperation with European companies, universities and research institutes.

During the opening event the CEO’s of Yili and Wageningen University and Research shared their views on the importance of international cooperation in the dairy sector. The mayor of Wageningen underlined the importance of the Yili Innovation Center Europe for the region.

To mark the importance of research in food and nutrition, a PhD award was granted to a promising PhD student who carried out an excellent study in the field.

Since 2016, Yili also has an R&D center in New Zealand, from where it coordinates activities for the Oceania region. Yili regards its R&D centers as the pillars of its innovation network where it works intensively with regional partners along the value chain in the fields of nutrition and health, product and process technology, food safety and farm management.

Yili Industrial Group Co., Ltd is Asia’s largest dairy producer. The company was founded in 1956 and is headquartered in Hohhot, the capital of the Chinese autonomous region of Inner Mongolia.