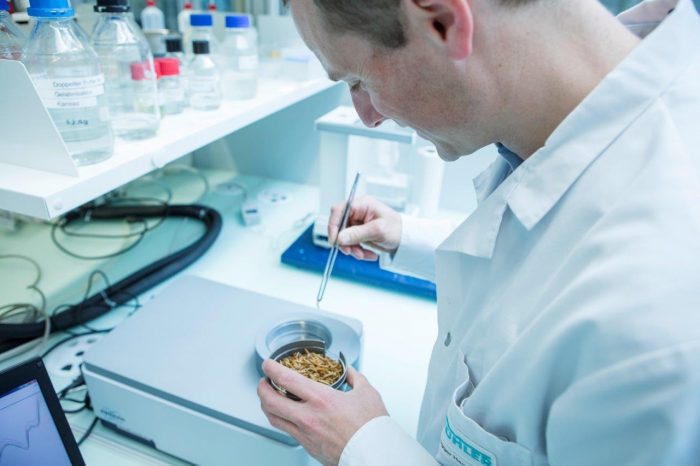 Bühler Insect Technology will build its first industrial plant to process black solider flies for animal nutrition together with its partner Protix in the Netherlands. Bühler will deliver the technology, equipment, and process know how for the rearing and processing of the insects and the feedstock preparation. Start of operation is planned for the first half of 2018. Andreas Aepli, CEO of Bühler Insect Technology, says: “With this first industrial insect protein production plant we will make an important step towards a more sustainable global food and feed value chain”.

Largest insect processing plant on an industrial scale in Europe

In January 2017, Bühler and Protix founded the joint venture Bühler Insect Technology to serve the insect processing industry. Building the first black soldier fly processing plant in Europe together is the next step in this cooperation and will serve as a modular and scalable blueprint for future projects.

The plant will be situated in the Netherlands and will serve customers in the feed industry. With construction starting this year, the plant is expected to be operational in the first half of 2018. It will produce protein meal and lipids that are used in the animal nutrition sector to feed pigs, chicken, fish, and domestic animals. The black soldier fly larvae are fed carefully selected organic byproducts from local distilleries, food producers and vegetable collectors in the Netherlands, which further underlines the sustainability of the process.

Bühler is a leader in processing grains, rice, cocoa, coffee, and other raw materials. Also, it is a leading solution provider of die-casting and surface-coating technologies in high-volume application areas, such as automotive, optics, and inks. As a leading technology group, Bühler invests up to 5% of its turnover every year in Research & Development. In 2016, its 10,640 employees in over 140 countries generated a turnover of CHF 2.45 billion. The globally active Swiss family-owned company Bühler is particularly committed to sustainability.