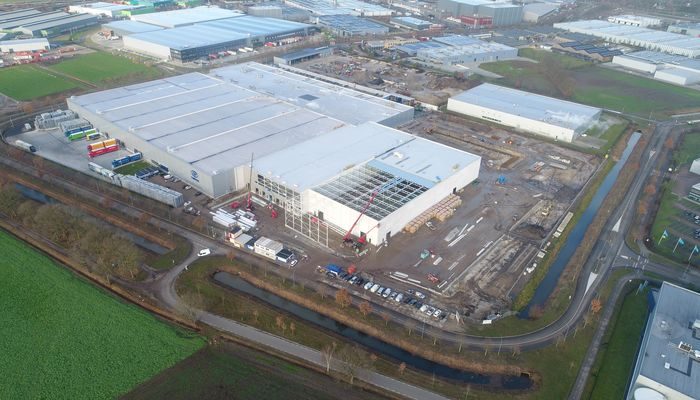 The CANPACK Netherlands factory, located at the business park BZOB in Helmond.

A little more than two years ago, CANPACK Netherlands invested over 100 million euros in a cans factory located in Helmond. CANPACK Netherlands is part of the CANPACK Group, a global manufacturer in packaging. The demand for packaging made by CANPACK for beer brewers and soft drink producers is growing significantly. Following this growing demand, the company celebrated today reaching the highest point of a new hall, which will accommodate a third production line. Once this line is ready, CANPACK will fill approximately 120 new positions and expand its capacity by 50 percent.

Marco Snoeren, General Manager of CANPACK Netherlands: “To run expansion of our production capacity, we will be looking to hire employees for various positions. We offer a fair compensation package. For example, all our employees are covered by the Metalektro collective labor agreement which is unique in the packaging industry. We also work in five shifts. This provides extra income and four consecutive days of leave.”

Eelko Brinkhoff, Director Foreign Investments at Brabant Development Agency, is also pleased with the expansion. “Employment was an important reason that we assisted CANPACK in choosing Helmond as a business location. That already 120 extra employees are needed, is beyond our expectations. A major investment by an innovative production company such as CANPACK is a huge incentive for the sustainable development of this region.”

The success of CANPACK

The success of CANPACK Netherlands is not alone. Following the increased demand for aluminum beverage packaging, the CANPACK Group has opened four factories all over the world in the last three years. In recent years CANPACK has strengthened its performance and market position worldwide. The number of locations is now at 28 sites and 6.500 employees in 18 countries: from Brazil to Finland and from Dubai to India. In five years, the total capacity has doubled up to 23 billion cans.