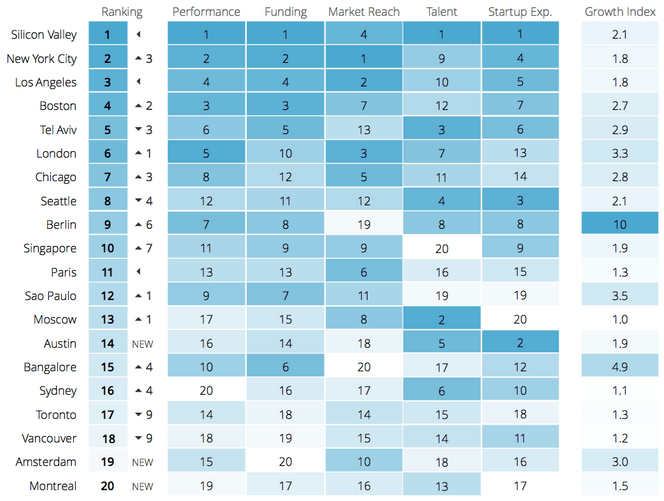 It has been almost three years since the last Startup Ecosystem Report was released in November 2012, and since then the startup sector has grown at a booming pace. The centerpiece of the 2015 Startup Ecosystem Ranking is our updated and revamped component index, which ranks the top 20 startup ecosystems around the world. The index is produced by ranking ecosystems along five major components: Performance, Funding, Talent, Market Reach, and Startup Experience.

Amsterdam-StartupDelta, the only European newcomer, enters the ranking at #19 with more than 1,900-2,600 tech startups and the 5th highest Growth Index of the top 20. It is geographically defined by the Amsterdam-The Hague-Eindhoven triangle. Amsterdam is an attractive location for tech startup founders due
to its unique lifestyle aesthetic and great startup infrastructure, and while it’s not as big of a startup ecosystem as more prominent European counterparts like London or Berlin, it certainly has the ambitions to become like them.

The Ecosystem’s success stories include Startupbootcamp, a global accelerator program now operating in more than ten countries, Nimbuzz, and the first Dutch tech unicorn, Ayden. Hyper-growth startups such as Uber established their European headquarters in Amsterdam and use it as the gateway to continental Europe.

To further enhance the ecosystem’s global impact, the Dutch government recently launched an initiative called StartupDelta, which is trying to unite and better allocate the startup resources of the Netherlands that are currently scattered across the country. Despite these promising developments, there is a long way to go. Amsterdam ranks last among top 20 in Funding. The lack of seed and growth capital impedes entrepreneurial success, especially with regards to later stage startups.

Due to the small size of the Dutch market, Amsterdam startups tend to think global from day 1, which explains an impressive #10 ranking in Market Reach. On average 50% of their customers are foreign and they offer their product in more than two languages from the outset. Finally, the historical tendency for entrepreneurs in Amsterdam to relocate to other cities when their startup is ready to scale may partly explain the noticeable gap of experienced serial founders and mentors in Amsterdam (#16 in Startup Experience).