Construction of New EMA Building in Amsterdam on Track

The laying of the foundation stone for the European Medicines Agency’s (EMA) new building in the Zuidas area of Amsterdam was marked with a ceremony on Monday, 28 May 2018. 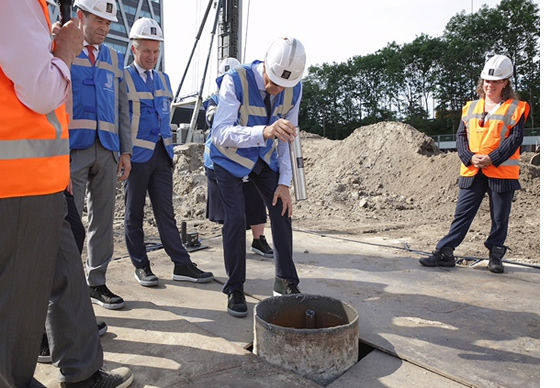 Speaking to representatives from the Dutch government, the City of Amsterdam, the Central Government Real Estate Agency (CGREA) and the construction company, EMA’s Executive Director Guido Rasi thanked the Dutch government for its warm welcome and its immediate launch of preparatory activities for the move of the Agency following the European Council’s selection of Amsterdam as EMA’s new home.

Together with Gea van Craaikamp, Deputy-Secretary General of the Ministry of Health, Welfare and Sport and the Amsterdam alderman Eric van der Burg, Guido Rasi placed a time capsule containing good wishes for the construction and for the building in a borehole of one of the foundation piles.

EMA’s new building has been commissioned by the Dutch government and will be built by CGREA together with a consortium of construction companies. Construction is expected to be finished by November 2019.

The construction of EMA’s new building is one of a series of work streams that need to progress at full speed to enable EMA’s successful relocation from its current location in London to Amsterdam in just over 10 months, by the end of March 2019. Projects teams from the Netherlands and EMA have been working closely since November, when the Council voted for Amsterdam as EMA’s new home. The aim of this intense collaboration is to ensure that the Agency can be operational as of 30 March 2019 in Amsterdam, initially out of the SPARK building in Amsterdam Sloterdijk, and that the Agency’s staff have the support they need to resettle together with their families.