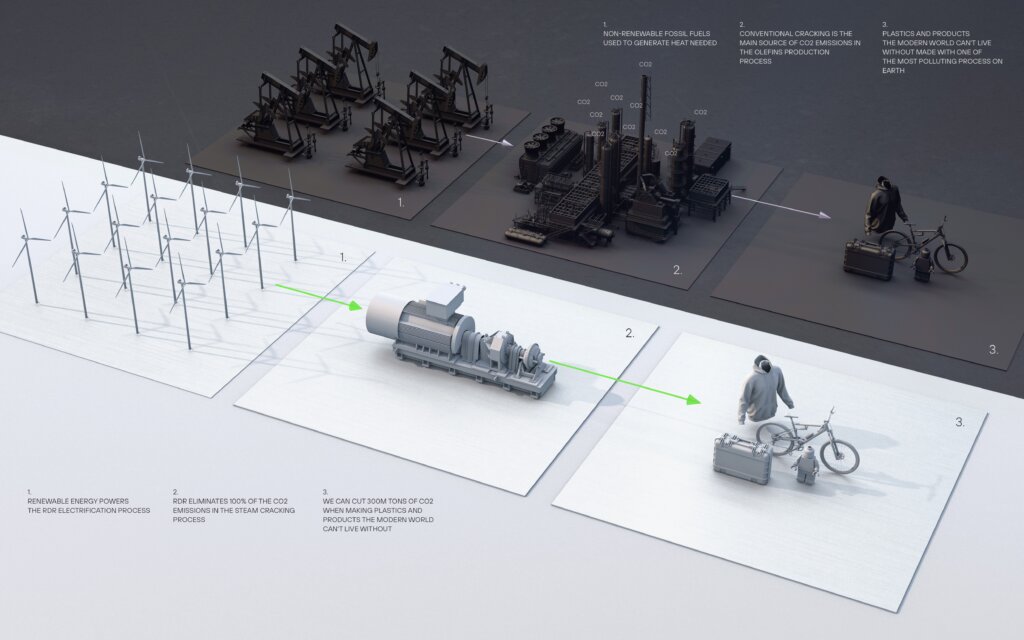 The Finnish company Coolbrook is taking a major step towards making the chemicals industry more sustainable with a pilot plant in the Netherlands. Coolbrook is developing an electric naphtha cracker which it says could completely replace traditional fossil fuel intensive crackers, potentially eliminating worldwide CO2 emissions by 300 million tons. To illustrate, in 2019 the Netherlands emitted in total 184 million tons of CO2 and CO2 equivalents, the national bureau of statistics reported.

The Dutch government is supporting Coolbrook’s innovative project with a grant of 5.5 million euros. The plant is being developed at the Brightlands Chemelot Campus in Geleen. Building is expected to be complete in April 2022 and testing will take 1.5 years.

Coolbrook has been working for years on new technology that represents a fundamental change in the cracking of naphtha. The company has developed a Rotor Dynamic Reactor (RDR) that uses renewable energy instead of fossil energy sources. Coolbrook is now ready to test this technology on a large scale and says it is the gateway to wide-ranging industrial application, and thus sustainability, of the petrochemical industry in the Netherlands and worldwide. Coolbrook says implementation of the RDR technology leads to crackers with no CO2 emissions, 30% reduction of energy consumption and therefore 60% more profit.

The basis for the RDR technology was laid by Coolbrook engineers in cooperation with the universities of Oxford, Cambridge, and Ghent as well as with Neste Engineering, Mitsubishi Heavy Industries, and Schmidtsche Schack.

By locating in the Netherlands Coolbrook chooses to further scale up its technology at the heart of one of the top 5 chemical clusters in the world. ‘The Brightlands Chemelot Campus is home to a number of innovative pilots involved in Olefins processing. With over 3,300 of the world’s leading experts in engineering, modelling, operations and maintenance, the Chemelot Campus is the best possible place to test and develop our RDR technology and our partner network,’ Coolbrook reports.

Ilpo Kuokkanen, Founder and Executive Chairman of Coolbrook states: ‘I am grateful to the Dutch government for embracing the added value of this innovative technology and enabling further development through a substantial grant. If the EU, national governments and the large oil companies want to make a real contribution to making the petrochemical industry more sustainable, within two years our RDR technology will be able to put an end to the now highly intensive and polluting industrial processes.’

Coolbrook has been operating in Geleen and the Netherland’s chemical industry since the beginning of 2020. The company has been guided in its European expansion by the Netherlands Foreign Investment Agency (NFIA) and the Invest in Holland network.