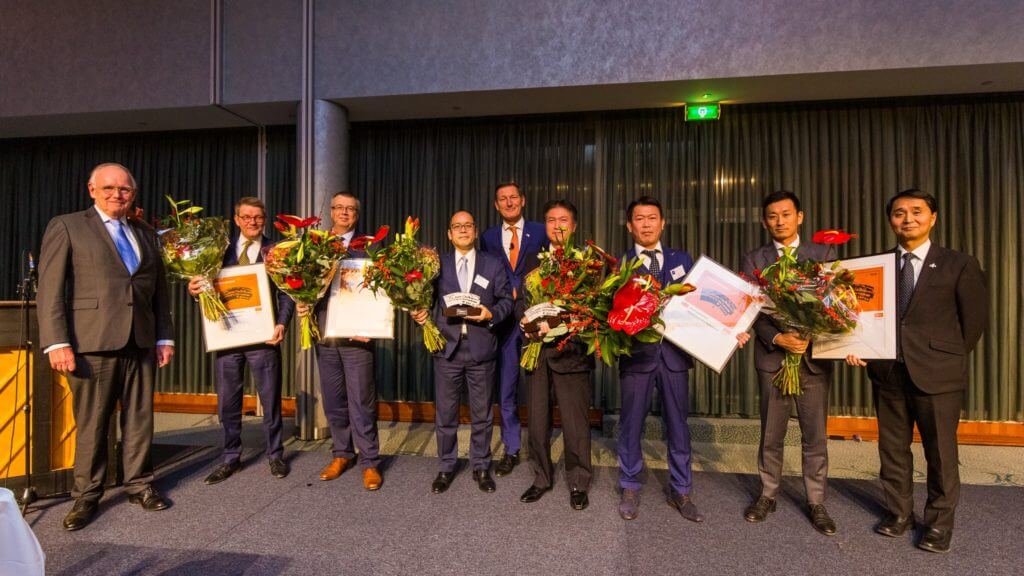 EKK Eagle Simrax and Yokogawa Europe were also nominated in the category ‘well-established’, in addition to Yakult. In the category ‘newcomer’ Mizuno Corporation Netherlands and Whill Europe made up the list of nominations together with MM Metal Recycling.

The Tokyo-based Yakult is celebrating its 25th anniversary in the Netherlands this year. In 1993, the first building activities of Yakult’s European production location started in Almere, north of Amsterdam. These European headquarters, Yakult Europe BV, started operations in 1994. The first bottle of Yakult produced in Europe was a reality on 28 March 1994.

In Europe, Yakult has six sales and marketing companies situated in the Netherlands, Belgium, Germany, Austria, United Kingdom and Italy.

The jury report mentioned that Yakult is a fitting brand in the Netherlands, which is renowned for its dairy. Yakult has become an important player in the Dutch and European market for probiotic drinks.

Moreover, Yakult has proven to be a good corporate citizen, since 1994 having been an active participant in regional activities in the Netherlands. Yakult’s philosophy is ‘Working on a healthy society’ and it thereby supports regional activities around the world where it as a company is active. Activities which Yakult sponsors and supports include the Dutch NOC*NSF Olympic sports foundation for which it provides over 200,000 bottles of Yakult per year to top sport centers, football and cycling teams. Yakult is the main sponsor of ‘Start to Run’, an organization that contributes to a more healthy lifestyle, and it is an official partner of the International Swimming Foundation FINA. In addition, the company supports the cycling event Zuiderzee Klassieker and the Run&Fun ladies run. Yakult also makes a significant contribution to cultural initiatives in its support of the Micropia museum in Amsterdam, the Netherlands Philharmonic Orchestra and Chamber Choir and the Van Gogh Museum.

In July 2016, the Mitsubishi Materials Corporation announced that it was establishing its metals company MM Metal Recycling BV in Moerdijk the Netherlands to expand the collection and processing of E-Scrap in Europe.

The innovative E-Scrap Center was opened on 20 September 2018. At the center, operations from reception to sampling of E-Scrap are carried out, which significantly shorten the period for valuation of E-Scrap and enables MM Metal Recycling to respond quickly to customer needs.

As the jury report notes, the center takes advantage of the Mitsubishi Process for continuous copper smelting*2, a unique technology for smelting metals with the lowest environmental impact in the industry.

Under Mitsubishi Materials Group’s corporate philosophy of ‘For People, Society and the Earth’, the company aims to become the world’s leading business group committed to supporting a recycling-oriented society through materials innovation and their use of unique and distinctive technologies.

In the Netherlands, MM Metal Recycling is further putting this philosophy of corporate social responsibility into practice by hiring people that have a distance to the labor market or had challenges in finding work.

A notable fact: Mitsubishi Materials is expected be the supplier of the medals for the Olympic Games in Japan in 2020.

The Deshima Awards reflect the long history of trade relations between Japan and the Netherlands. They are named after the Japanese island of Deshima which was a Dutch trading post from 1641 to 1854. During that time, the small fan-shaped artificial island in the bay of Nagasaki was the single place of direct trade and exchange between Japan and the outer world. In 1854 Deshima was abolished with the Treaty of Kanagawa and since 1922 it is designated a Japanese national historic site.

Currently over 850 entities of over 530 Japanese companies are registered at the Dutch Chamber of Commerce. They employ over 42,000 people directly and make the Netherlands the 3rd favorite home for Japanese companies in Europe, behind Germany and the UK.

For the 2019 Awards, the jury was chaired by Mr. Jeroen Nijland, Commissioner NFIA. He was assisted by Mr. Geert Jan Mantel, Chairman of DUJAT, and Mr. Yoshinobu Satomi, Chairman of the Japanese Chamber of Commerce (JCC).

Previous winners of the Well-Established Awards:

Previous winners of the Newcomer Awards: