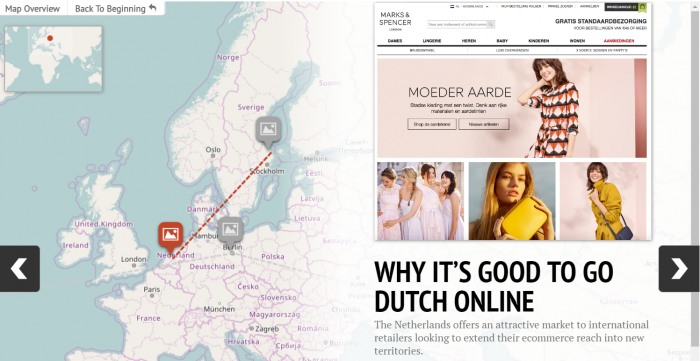 Fashion business magazine Drapers recently profiled the Netherlands e-commerce market in its “Guide to International Online Expansion.” The feature highlighted the sector’s strength and identified it as a promising target for international retailers expanding their reach online.

Holland has one of the fastest growing e-commerce markets in Europe. This makes it “an increasingly important market for international retailers looking to expand,” noted Drapers. According to Dutch national statistics office CBS, the Netherlands’ online retail sales grew by 18.7 percent in 2016. 23 percent of Dutch consumers bought at least one item from an international website last year. By the end of 2017, research agency Statista estimates the Dutch e-commerce market will be worth €7.12 billion. Fashion is expected to be the fastest growing category within the Netherlands’ e-commerce.

The Netherlands offers a robust and well-connected customer base. An impressive 98 percent of the Dutch population use the internet and 93 percent make online purchases. The Dutch are also plugged into mobile devices, with 76 percent of the population using smartphones in 2015.

“Online shopping continues to grow in scale and relevance [in the Netherlands] as customers look for more choice and greater convenience,” explained Debbie Havekin, Head of International Online Trading at Marks & Spencer.

Adding to the Holland’s potential, cross-border ecommerce is growing at an annual rate of 31 percent.

Foreign companies entering the Dutch market can also count on broader benefits including a stable economy and a strengthening housing market. The Netherlands is improving business prospects while maintaining low inflation. According to CBS, national consumer confidence has been growing since last summer.

“The Netherlands should be a high priority market for retailers who would like to take their first step towards international expansion,” says Regina Lau, Chief Strategy Officer for international payment solutions provider Ingenico.

Competing in the local market

To compete in the Netherlands’ online industry, retailers must adapt to consumer preferences. Key pieces of advice include setting up a Dutch domain name, having a website in the local language and listing prices in euros. Additionally, providing proper payment options such as credit, debit and popular money transfer service iDeal is also important.

“For retailers with a localized website and demonstrable understanding of the Dutch consumer, the Netherlands is full of opportunity to expand online,” concludes Drapers.