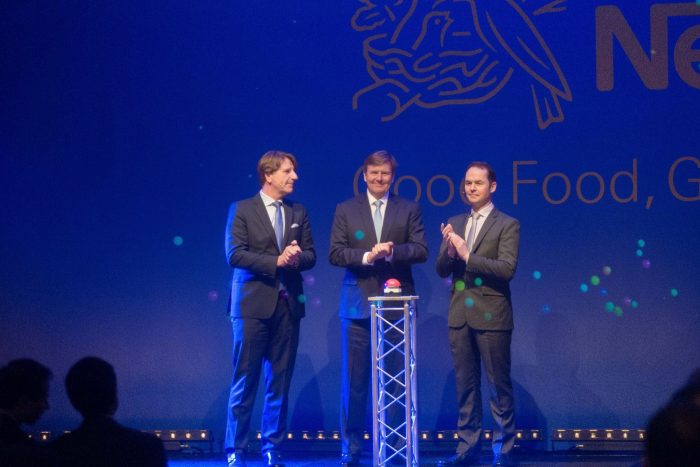 On 28 March, King Willem-Alexander of the Netherlands officially opened the innovative new Nestlé factory in Nunspeet – the only location in the world that produces formula for babies with a cow’s milk protein allergy. Switzerland-based Nestlé has invested almost 100 million euros in the new science-based production line. The festive opening also marked Nestlé’s 150-year presence and tradition of food innovation in Holland.

Nestlé currently employs some 1,100 people in both the Nunspeet factory and its Dutch head office in Amstelveen.

The new hypoallergenic baby food  was developed for Nestlé Health Science in the Nestlé Product Technology Center for infants with a protein intolerance. Food allergies are on the increase, with a strong rise particularly over the last ten years. In some industrialized countries, up to ten percent of infants have some kind of food intolerance. In addition to the newest baby formula, Nestlé produces serval other baby food brands at its Dutch factory.

150 years of food innovation in the Netherlands

The Nunspeet factory goes back to 1895, when the company produced milk in bottles and cans. The first baby food in Nunspeet was produced in 1974 and over the years the site has been gradually transformed into a modern factory specializing in the production of high-quality baby food. Today, around 400 employees work in the Nestlé factory every day to manufacture products that are exported to around 140 markets worldwide.