Foreign Direct Investment Accounted for More than 12,500 Jobs in 2017

These impressive results are credited to the Invest in Holland collective 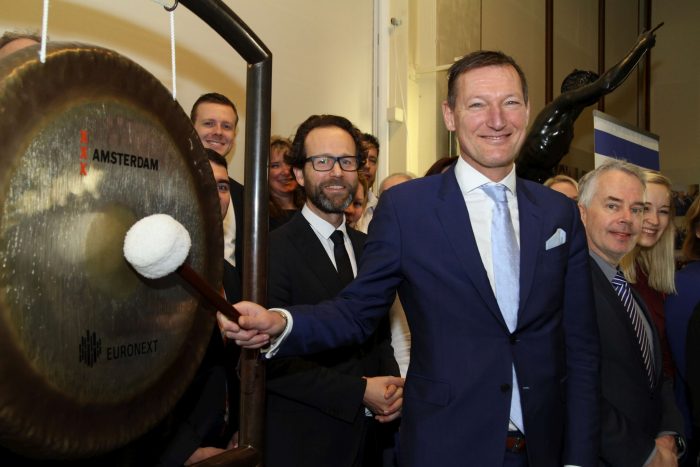 NFIA Commissioner  Jeroen Nijland opens trading on the Amsterdam exchange by sounding the gong. NFIA is celebrating the  publication of its annual results for 2017, as well as marking its 40th anniversary this year.

The Hague, 25 January 2018 — Through foreign direct investment 357 foreign companies, including Netflix, Merck Performance Materials and Jellice, generated 12,686 additional jobs in the Netherlands last year contributing 1.67 billion euros to the economy. These impressive results are credited to the Invest in Holland collective, which consists of the Netherlands Foreign Investment Agency (NFIA), an operational unit of the Dutch Ministry of Economic Affairs and Climate Policy, together with various regional partners.

Minister of Economic Affairs and Climate Policy, Eric Wiebes, commented: “The presence of foreign companies is important for our country. Some 1.4 million Dutch people have a job directly or indirectly thanks to these companies. The excellent annual NFIA results confirm that we benefit from a good investment climate. Our highly educated population, good infrastructure, pleasant housing and living conditions and competitive fiscal climate attract foreign companies and employees. For our future economic growth and employment it is important that the Dutch business climate remains attractive. We all benefit from that. ”

Sigrid Kaag, Minister for Foreign Trade and Development Cooperation, under whose responsibility the NFIA falls as well, commented: “The Netherlands has an attractive business climate, and the Dutch economy is in good shape. Also, with a view to Brexit, there is increasing interest from international companies to move activities to the Netherlands or to establish themselves in the Netherlands. It is therefore important that the NFIA, Dutch embassies and consulates overseas continue to put the Netherlands on the map abroad.”

Within the Invest in Holland network, the NFIA was directly responsible for 8,158 of the 12,686 jobs. In 2017, the NFIA registered 224 foreign direct investment projects for the Netherlands, corresponding to 1.23 billion euros in investments. The NFIA results show that most new jobs were created in distribution centers (1,864), at headquarters (1,345), in marketing & sales offices (1,316), R&D (1,259) and production sites (1,081). To illustrate, Netflix expanded its European headquarters in Amsterdam with a customer contact center of 400 jobs. Merck Performance Materials invested 15 million euros in its production plant for so-called liquid crystal glass in Veldhoven. Meanwhile, Japanese gelatin producer Jellice expanded its production plant in Emmen, resulting in 25 additional jobs.

As in 2016, the majority of ‘foreign’ jobs were created by companies from the United States. NFIA results for 2017 indicate some 2,516 jobs created by US companies, bringing 110 million euros in investments.  Companies from within Europe also provided a substantial number of jobs (2,879), including the UK (872). Japan and India provided 655 and 423 jobs, respectively.  Majority of jobs from foreign investments in 2017 came from creative industries such as fashion and entertainment & media (2,126). Additional jobs by sector include agrifood (1,788), IT (1,219), life sciences & health (600) and business services (457).

Within the Invest in Holland network, special attention was on Brexit last year. The NFIA is in contact with more than 200 foreign companies that are considering a switch to the Netherlands in the wake of Brexit. Many companies choose to wait before they announce their plans for the future, due to the lack of clarity about the new relationship between the UK and the EU. In 2017, 18 companies made a Brexit-related move to the Netherlands. These re-locations accounted for 483 jobs and 19 million euros added to the Dutch economy. In these results, the relocation of the European Medicines Agency (EMA) to Amsterdam is not yet included.