Grand Opening of CANPACK Beverage Can Factory in the Netherlands 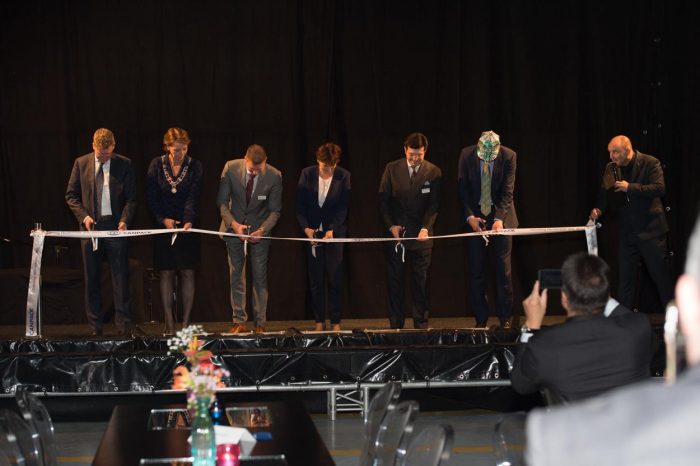 The grand opening ceremony was honored by the presence of the Chief of the Chancellery of the President of the Republic of Poland, Mrs. Halina Szymańska, who read a letter on behalf of the Polish President Mr. Andrzej Duda. Various Dutch government representatives attended the grand opening as well, including Mr. Ernst Noorman, Director International Programs at the Netherlands Enterprise Agency and Mr. Bert Pauli, Vice-governor of the province of Noord-Brabant. In addition to Giorgi Global Holdings, Inc. owner, Mr. Peter Giorgi, and the CANPACK Group management team, the organization had invited CANPACK Group customers, local government authorities, supporting financial institutions, contractors, suppliers of machinery and equipment and suppliers of raw materials.

The aluminum beverage can factory in Helmond involved an investment of more than €100 million. The production facility and the factory warehouse with a total area of 40,000 m2 are equipped with two production lines with annual production capacity of 2 billion cans in various sizes. The factory in Helmond is the biggest Polish production investment in the Netherlands. It is considered in the industry as one of the most energy-efficient and most technologically advanced plants in the world. The company will produce beverage packaging for customers in the Benelux, Germany and France and will significantly increase employment in the province of Noord-Brabant, the Netherlands.

CANPACK Group is the strongest and most innovative Group in the metal packaging industry in Central and Eastern Europe and continues to strengthen its market position in Western Europe, Asia, Africa and South America. The CANPACK Group, with its headquarters in Krakow, is one of the first Poland based, genuinely global companies that have grown since the changes in Central Europe in the early nineties and Poland joining the European Union. The result of more than 25 years of activity, courageous engineering projects and huge investments, has led to the world’s highest technology level of produced packaging. At present, in 26 production plants in the CANPACK Group there are more than 6,000 employees. In addition to the production of aluminum beverage cans, the Group also manufactures glass bottles, crown closures and metal packaging for the food and chemical industries. The CANPACK Group is a supplier of packaging to international corporations and sells its products to more than 70 countries around the world.