Official opening of renovated factory in Oosterhout:  “ready for the future, to supply more machines at shorter delivery times and lower costs” 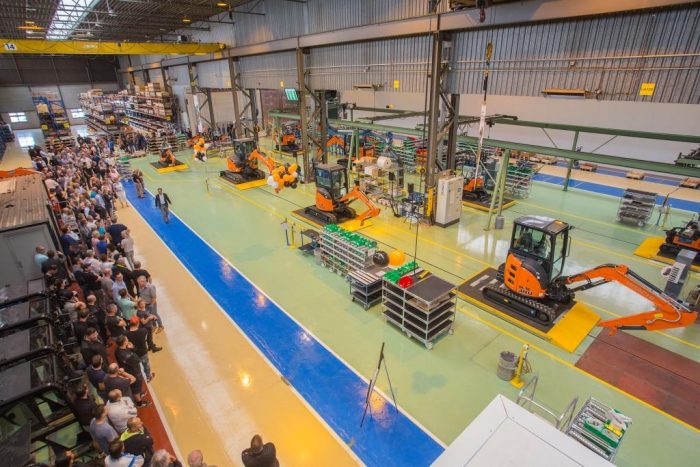 Hitachi Construction Machinery (Europe) NV (HCME) has officially opened its renovated mini and compact excavator factory in Oosterhout, the Netherlands. The new 8,000m2 facility was unveiled in a special ceremony on 21 June, which was attended by key Hitachi customers and HCME employees.

The extensive modernization program, which began in January this year, will enhance efficiency at the factory that is responsible for producing the ZX10 to ZX85 models. It will also meet the growing demand for Hitachi mini and compact excavators across Europe.

The factory’s General Manager, Marco Verhoef, says: “We have already doubled our output since 2014 from 2,500 to 5,000 machines by 2018. The renovation of the factory was necessary to help us grow further, and will enable us to produce more than 7,000 machines per year, according to market demand.”

As part of the upgrade, a state-of-the-art, semi-automatic assembly line has been installed, as well as new equipment and paint booths. The staff at the factory have also adopted the ‘takt time’ approach, which means completing an activity within a certain amount of time and results in an optimal work flow. Inventory has also been reduced by following the kanban method of lean manufacturing.

The official opening was marked with confetti being released by HCME President and CEO, Makoto Yamazawa, and Director Production and Procurement, Kazutoshi Yoshioka. Speaking at the event, Marco thanked the factory’s 100 employees for their effort and resilience in recent months. Production at the site had continued throughout the six-month renovation program.

“Thanks to all of our dedicated personnel, we now have a fully redesigned and modernized factory, and are very proud of what we have achieved. We are ready for the future, to supply more machines at shorter delivery times and lower costs.”

Hitachi Construction Machinery (Europe) NV (HCME) is a subsidiary of Hitachi Construction Machinery Co., Ltd. (HCM) and is responsible for the manufacture, sales and marketing of Hitachi construction equipment in Europe, Africa, the CIS and the Middle East.  Besides the mini excavator and special application factory in Oosterhout, HCME also has a Training & Demo Center and medium excavator and wheel loader factory in Amsterdam. The company employs some 600 people in the Netherlands.