The Netherlands moves up to 4th place in global competitiveness

The Netherlands is the most competitive country in Europe and has the fourth most competitive economy in the world, according to the 2018 IMD World Competitiveness Ranking. Worldwide, the Netherlands moves up one place to 4th, swapping with Switzerland which moves down to 5th. The United States returns to the first spot, followed by Hong Kong and Singapore. 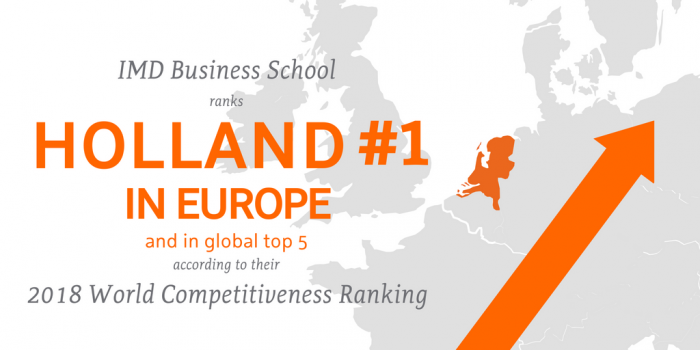 The IMD reports that the Netherlands’ advancement shows a ‘balanced’ path to competitiveness, ranking in the top 10 in economic performance, government and business efficiency. Switzerland declines mainly due to a slowdown in exports and, to a lesser extent, an increase in perceptions about threats of relocation of R&D facilities.

The United States improves three positions from last year while Hong Kong drops one spot and Singapore remains 3rd. The remaining places in the top 10 are occupied largely by Nordic countries: Denmark, Norway and Sweden rank 6th, 8th and 9th respectively. The UAE (7th) and Canada (10th) close the top of the rankings.

Marking its 30th edition this year, the IMD World Competitiveness Rankings emphasize a long-term trend highlighted in past editions – that the countries on the top of the list each have a unique approach to becoming competitive.

Professor Arturo Bris, Director of the IMD World Competitiveness Center, notes that “this year’s results reinforce a crucial trait of the competitiveness landscape. Countries undertake different paths towards competitiveness transformation.” He adds “countries at the top of the rankings share an above the average performance across all competitiveness factors, but their competitiveness mix varies. One economy, for example, may build its competitiveness strategy around a particular aspect such as its tangible and intangible infrastructure; another may approach competitiveness through their governmental efficiency.”

The IMD World Competitiveness Center, a research group at IMD business school in Switzerland, has published the rankings every year since 1989. It compiles them using 258 indicators. ‘Hard’ data such as national employment and trade statistics are weighted twice as much as the ‘soft’ data from an Executive Opinion Survey that measures the business perception of issues such as corruption, environmental concerns and quality of life. This year 63 countries are ranked.