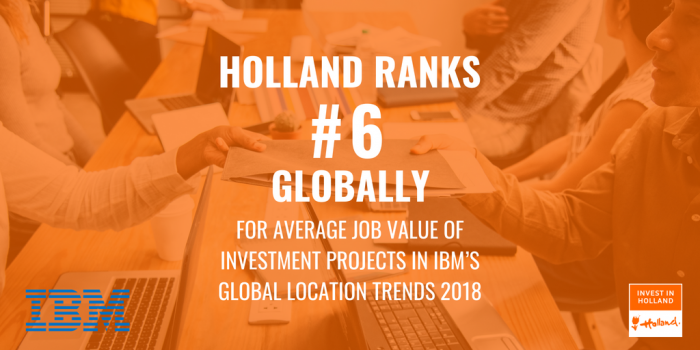 In total, 367 new FDI projects were registered by IBM, which is the second best performance historically, after the record of 426 projects in 2016. These projects generated 12,686 additional jobs in the Netherlands.

The Amsterdam/Rotterdam metropolitan area ranks 4th in the global ranking based on the number of projects (with a minimum of 10 jobs). In total, 148 projects qualified. London, Paris, Singapore and Chicago make up the remainder of the top five of this ranking.

Value Indicator for quality of jobs

In 2017, the majority of ‘foreign’ jobs were created by companies from the United States, Germany, India and the UK. The investing companies come from various industry sectors, predominantly from ICT, wholesale and retail, distribution and logistics and high tech such as electronics.

IBM’s annual Global Location Trends report presents and analyses the latest developments in corporate location selection around the world. The analysis is based on real life decisions made by companies about where to establish new operations or expand existing business around the world.