On Friday, 6 April 2018, Holland’s largest land based fish farm Kingfish Zeeland was officially opened in Kats by Mr. Jo-Annes de Bat, Provincial Executive of the Province of Zeeland. Kingfish Zeeland is specialized in the sustainable cultivation of Dutch Yellowtail fish which is in growing demand as an alternative to endangered tuna and swordfish. 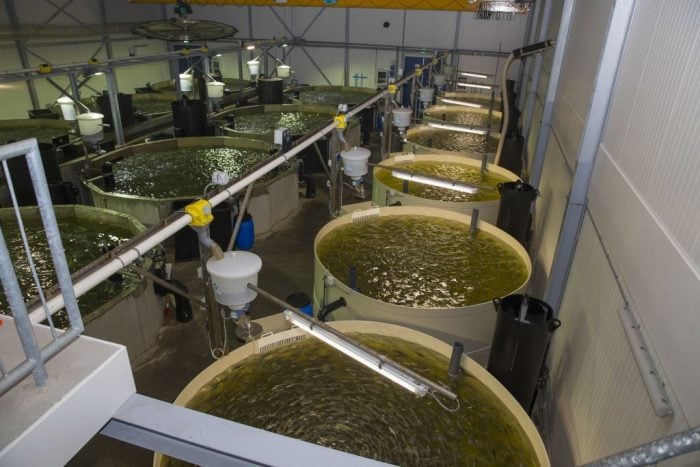 Kingfish Zeeland developed innovative aquaculture technology to cultivate Dutch Yellowfish in a sustainable closed system – without chemicals, antibiotics or vaccines – with 100 percent green energy from wind turbines and heat pumps. The fish farm taps into the purified estuary water of the Oosterschelde, a Natura 2000 nature reserve. The fish are fed the highest-quality non-genetically engineered organic food, which also leads to a high level of healthy Omega 3. The comfortable, stress-free environment is ideal for animal-friendly breeding of pure and healthy fish, Kingfish Zeeland says.

Instead of further overfishing our oceans, or burdening the environment with cage farming, Kingfish Zeeland has developed a sustainable and innovative breeding process, the company explains. The recirculating aquaculture system (RAS) offers many advantages. It moves the science and practice of aquaculture to land, where it can be accurately monitored and controlled while the production does not affect the environment.

Yellowtail is alternative for endangered fish

The exclusive Yellowtail fish (also known as Kingfish, Hiromasa and Seriola Lalandi) is a species comparable to tuna and is found primarily in Asia. With its firm texture, delicate taste, and light pink color, the Yellowtail is popular in Western cuisine and is shipped thousands of kilometers from Japan and Australia. A versatile fish, Yellowtail is commonly served as sushi, sashimi, smoked, cooked or grilled as a fillet or whole fish.

Kingfish Zeeland’s mission is to enable both professional chefs as well as home cooks to enjoy the purest, freshest and most sustainable fish. To demonstrate the potential of Yellowfish, Dutch top chef Mart Scherp, of restaurant Scherp in Middelburg, made a presentation during the official opening of the fish farm. “The fish can be smoked, like salmon, briefly grilled, pan-fried or barbecued, served raw as tartar, thinly cut and marinated, like Sashimi, or as Ceviche, marinated in citrus juice”, Scherp explained.

Kingfish Zeeland began its first Dutch Yellowtail cultivation in June 2017 at the farm site near the Zeeland Bridge. This cultivation project turned out to be such a success – the growth of the fish surpassed expectations – that Kingfish Zeeland brought the fish to market six months sooner than planned. Meanwhile, the Dutch Yellowtail has been awarded the ‘Green Label’ by the ‘Good Fish Foundation’ and was also the winner of the ‘Horecava Innovation Award 2018’.

Kingfish Zeeland was founded by, Ohad Maiman of the Israeli Merhav Group, Kees Kloet of Silt Farm, and Hans Den Bieman, Director of Sealand and former CEO of Marine Harvest. They bring together a unique and complimentary mix of hands-on Yellowtail farming, senior management in the Aquaculture field, and a diverse project development background.