New factory marks the conclusion of a major expansion drive 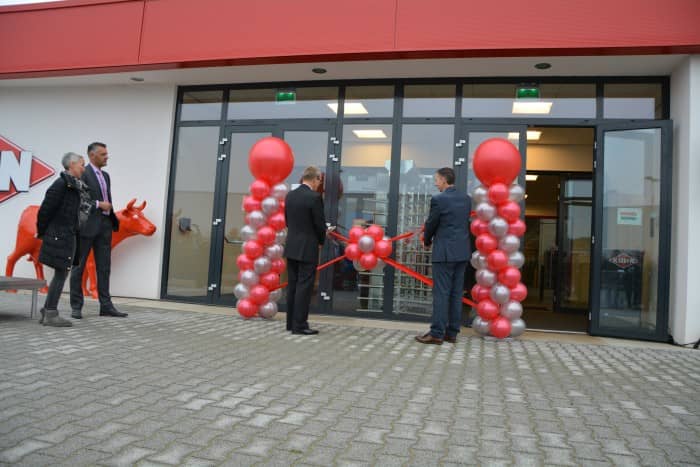 Last week the farming machinery manufacturer KUHN-Geldrop opened its new factory building and adjoining manufacturing facilities, marking the conclusion of a major expansion drive. The Geldrop company, which employs 350 people, is anticipating further growth and is now ready to tackle future challenges. At one stage the company considered moving abroad, but that option has now been scrapped, with the Brabant Development Agency (BOM) helping KUHN to opt instead for investing in its current location.

KUHN Geldrop B.V. is a part of the multinational KUHN Group, an agricultural machinery market leader that employs 5,200 people worldwide. Geldrop is the sole location where the company develops and manufactures balers, bale wrappers, and drum mowers. These are high quality and complex machines that are electro-mechanically operated and built according to specific customer requirements.

The opening of the new facility marks the conclusion of a period that saw the completion of a new assembly hall in 2014 and a new shipping hall and powder coating facility in 2015, for a total investment of €60 million. The factory site now covers 16 hectares, making it in all likelihood the largest manufacturing site for agricultural machinery in the Netherlands.

“KUHN does not do things halfway,” says KUHN-Geldrop General Manager Marc Peeters. “Our motto is ‘Be strong, be KUHN’. At the time that we decided to enlarge the Geldrop facilities, we committed to that decision 100 percent, working together with regional bodies. In this location everything that can help us to develop further is available – well-trained people, excellent suppliers, high-tech knowledge, specific automotive knowhow, and a culture of cooperation.”

BOM, together with Brainport Development and the Netherlands Foreign Investments Agency (NFIA), already came on board in 2008 to help make this investment a reality. At that stage KUHN was still exploring the possibility of moving its factory abroad, but the company received an analysis and benchmark, among other things, of the opportunities available in the Netherlands. At the time BOM and its partners acted as KUHN’s sparring partner in terms of developing the business case.