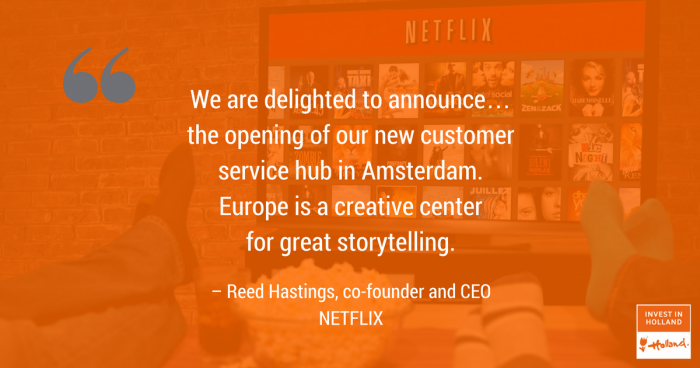 Video streaming giant Netflix will soon be opening a new customer service center in the Netherlands, expanding its European headquarters. The company will create 400 jobs in Amsterdam to service customers across ten European countries and other international markets.

Netflix, which opened in Amsterdam in 2015 with 30 employees, currently has more than 120 employees in Holland. Its EMEA headquarters works across all business functions.

“We are delighted to announce the creation of jobs in Europe and the opening of our new customer service hub in Amsterdam. Europe is a creative center for great storytelling that resonates around the world and we continue to invest in European content,” said Netflix co-founder and CEO Reed Hastings.

“The decision by Netflix to add a customer support center along with its EMEA headquarters in Amsterdam illustrates that our business climate is exactly what leading companies are seeking when investing in their future,” said Jeroen Nijland, Commissioner for Foreign Investment, Netherlands Foreign Investment Agency (NFIA). “The Netherlands’ fast internet speeds, e-commerce strengths and multilingual talent pool make our country a great match for the Netflix expansion to support its rapidly growing European market.”

The ongoing expansion of Netflix’s workforce in the Netherlands complements the company’s $1.75 billion investment in European content. The global internet television network has over 100 million members in over 190 countries. Netflix users enjoy over 125 million hours of TV shows and movies per day, including original series, documentaries and films.

Netflix joins other North American tech giants such as Cisco and IBM with service centers in the Netherlands. Many are in conjunction with headquarter, logistic or manufacturing facilities due to Holland’s strategic location.