The Netherlands to Manage F-35 Equipment for Europe

“With the arrival of the European distribution center for F-35 parts, the position of the Netherlands as a distributing country is confirmed and further strengthened” 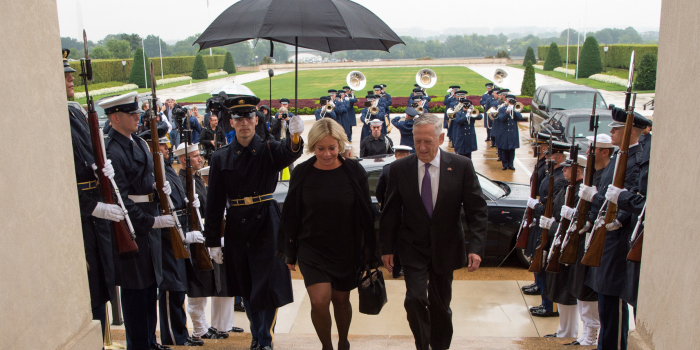 Photo courtesy of US Department of Defense, Army Sgt. Amber I. Smith

The US Department of Defense announced today that the Netherlands will store all the parts of the F-35 airplanes in Europe. The Netherlands will be responsible for storage, shipping and management of spare parts of over four hundred F-35s for the coming decades. The Royal Air Force Logistics Center Woensdrecht (LCW) will hold main responsibility for the storage of the equipment. In addition, some 70 Dutch companies will benefit from this contract.

Minister Jeanine Hennis-Plasschaert received the good news yesterday at the Pentagon from her American counterpart Secretary Mattis. The supervisor of the F-35 program, Vice Admiral Mathias Winter, informed her later on the details.

“After years of political discussion, we now see that the decision to choose the F-35 as successor for the F-16 also meets economic expectations. It is operationally the best aircraft and it also provides jobs for Dutch businesses. This is good news for our country and a compliment to Dutch industries. It is illustrative of the cooperation between government and industry and the quality of our companies.”

Minister Kamp (Economic Affairs) also welcomes the news: “With the arrival of the European distribution center for F-35 parts, the position of the Netherlands as a distributing country is confirmed and further strengthened. This is good for our employment and is expected to generate hundreds of millions of additional revenue for our logistics and distribution sector. ”

Dutch companies are involved in management, transportation and shipping of spare parts. The driving force behind this assignment is Onelogistics. This cooperation of companies in logistics, knowledge institutions and the ministries of Defense, Economic Affairs and Infrastructure and Environment has made efforts to bring this business to the Netherlands. The competition for the storage and logistics aspects of spare parts began in 2016. The Netherlands had to compete with several other countries.

Minister Schultz van Haegen (Infrastructure & Environment): “It is good to see that investments in logistics lead to results. This is good for business and good for our country.”

Maintenance on the F-35 will be handled in a smart way. The components are stored in a central warehouse in the Netherlands. From there, they can quickly be packaged and shipped, with customs clearance and export licenses. The European Warehouse at the LCW will also have a post at Schiphol, because transport not only goes by road, but also by air. A so-called control tower streamlines logistics processes. With the approach proposed by the Netherlands, logistics costs are kept low, stocks optimized and the availability of F-35 devices ensured. The Pentagon chose the Dutch proposal because of this integrated approach.

The new warehouse is the first step towards a modern logistics concept for F-35 parts in Europe. Additionally, it shows that The Netherlands is a leader in logistics.

The Netherlands was previously selected as one of the four countries that will service the engines of the new fighter aircrafts, together with Australia, Norway and Turkey. At the LCW, a test facility and workshop are being built as part of the global maintenance infrastructure for the F-35 engines.

The Netherlands has been a partner in the F-35 program since 2002. The business community benefits from contracts for the construction and maintenance of the F-35. In 2013, the Dutch government decided to replace the F-16 with the F-35. The aircraft device meets the operational standards of our country and participation in the program ensures assignments and employment for companies.

In addition to engine maintenance, the F-35 starter engine and landing mechanism, this is the fourth success in maintaining the F-35 for the Netherlands in a short period of time.