Nuctech to Open Offices in Rotterdam and Amsterdam 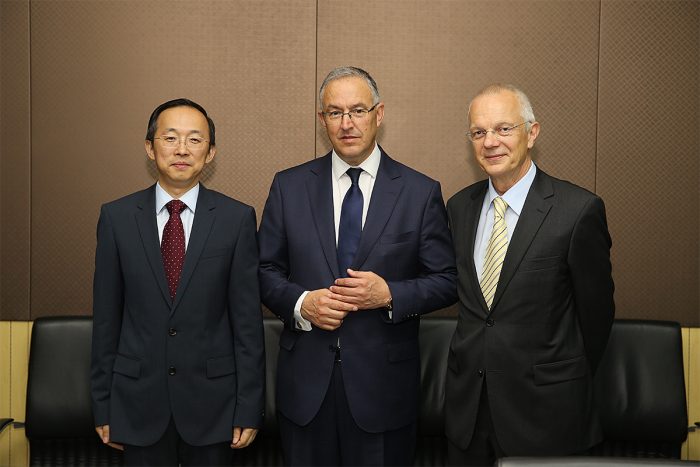 From left to right: Dr. Zhiqiang Chen – President of Nuctech, Mayor Aboutaleb of the City of Rotterdam,
Paul Menkveld – Chargé d’Affaires a.i. at the Embassy of the Kingdom of the Netherlands in Beijing

The Chinese company Nuctech is to establish itself in the Netherlands and open offices in two locations: Rotterdam and Amsterdam. Nuctech is a global provider of technology services in the areas of security and inspection for customs, airports, ports, railways and major events. The arrival of Nuctech will bring an expected investment of 3 million euros with it.

Nuctech already does a lot of business in the Netherlands. It supplies container scanners to the Rotterdam port and luggage scanners to Schiphol airport. The Chinese company has therefore decided on offices in Rotterdam and Amsterdam to further European expansion. Nuctech already has a factory in Poland and a team in Belgium.

The Dutch branch of the company will engage in marketing and sales, R&D and service for its European clients. The company will open in the Netherlands in October this year, which is Nuctech’s 20th anniversary.

Mayor Aboutaleb welcomed the company to the Netherlands during a trade mission to, among other places, Beijing. The arrival of Nuctech in the Netherlands is the result of collaboration between Invest in Holland partners the Netherlands Foreign Investment Agency (NFIA), Rotterdam Partners (RP) and amsterdam inbusiness (aib).

Dr. Chen Zhiqiang, Chairman of Nuctech Company Limited: ”Nuctech as the world leading security system and solution provider already delivered several projects to Dutch customs during the past 10 years. Our products have also started to be delivered to airports, cruise terminals and post offices in Netherlands since last year. We see our products can help our customers effectively protect the public security of its country and we see Netherlands is a great home base for Nuctech in Western Europe to do marketing development and R&D. Dutch government is really supporting us in setting up and is making us feel very welcome.”

Jeroen Nijland, Commissioner NFIA: “The NFIA has joined forces with various regional partners in the Netherlands under the name of Invest in Holland, since 2015. The network profiles the Netherlands abroad as an attractive country to invest in or open a branch in and helps interested investors with setting up and expanding their international activities in the Netherlands. It’s good to welcome Nuctech to the Netherlands thanks to this collaboration.”

Chantal Roest, Managing Director of Rotterdam Partners International Trade & Investment: “Investment follows Trade. Nuctech is a fine example of this. After a few years of selling machines in the Netherlands and Europe, Nuctech has decided to settle in the Netherlands. We are proud to welcome such a great Chinese company also to Rotterdam!”