With a total investment of around 5 million euros, the opening of the new Rivers International School Arnhem marks an important step in the expansion of capacity in international schools. It benefits not only the students, the staff of the school, and the local community, but also strengthens the international business climate in the east of the Netherlands. The new building was officially opened on Monday 27 March 2017.

For over 30 years the international school Arnhem was located elsewhere in the city, until regional partners decided to bundle their activities and disciplines together in the new facility. The move reflects a broader government strategy to rapidly increase capacity in international schools in the Netherlands, due to growth in demand, especially in the Amsterdam and The Hague regions.

The new establishment of the Rivers International School provides a larger volume of high-quality education options for the increasing number of expat families moving to the region from overseas. This is partly due to the nearby Food Valley cluster in Ede/Wageningen, universities and knowledge institutions, and other commercial operations in the surrounding regions.

The new building is a modern and imposing construction of approximately 5,800m2, located close to Arnhem-zuid railway station. The design, by LIAG Architects, includes a cutaway section of roof and walls allowing natural light to flood in. The building has also been designed with the different phases of education and ages of students in mind.

Drawing the whole entity together is a long, meandering blue staircase running through the heart of the building, symbolizing the influence of the rivers in this part of the country, namely, the Nederrijn and the Waal/Rhine. The blue stairway also symbolizes the students’ journey through the school, until they eventually graduate and set sail on their own personal life journeys. 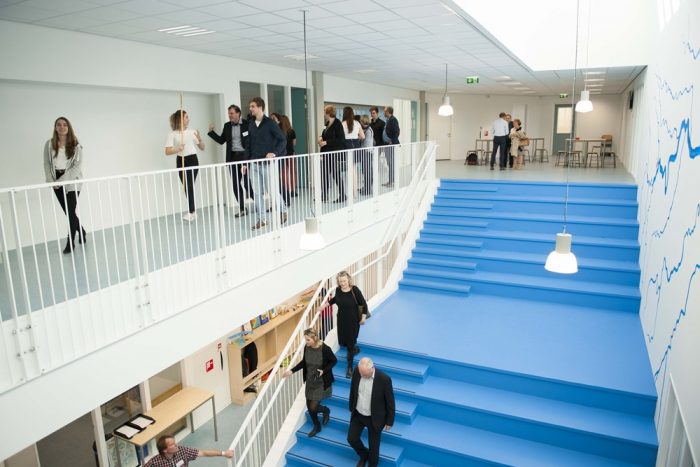 At the moment, some 300 children from parents of 40 different nationalities study at the school and there is room for a further 200 new pupils. The school also forms an important social hub for many of the expat workers whose children attend the school. They, also, can attend language classes here, plus there is a parent’s-room where they can exchange ideas and experiences, and also a Grand Café for socializing. This latter, is also intended as a link to the local community in the neighborhood of the school, who are welcome to use the facilities and can rent spaces for events, and such like. The possibility for future expansion has been allowed-for in the current design.