Strong Job Growth Thanks to Foreign Direct Investment in the Netherlands

350 foreign investors, such as Oracle and Danone, were responsible for the creation of more than 11,000 new jobs in the Netherlands last year. Together these companies invested 1.74 billion euros in the Dutch economy. These jobs and investments were secured by the Netherlands Foreign Investment Agency (NFIA), an operational unit of the Dutch ministry of Economic Affairs, together with its regional partners in the Invest in Holland network.

Minister Kamp of the Dutch ministry of Economic Affairs: “These great results confirm once again that the Netherlands is an attractive country for foreign companies. Our population is highly educated, we have an excellent logistics infrastructure and our digital highways are world leading. The Netherlands has much to offer to international companies. This is made apparent by some 900,000 employees working for foreign-owned companies in this country.” 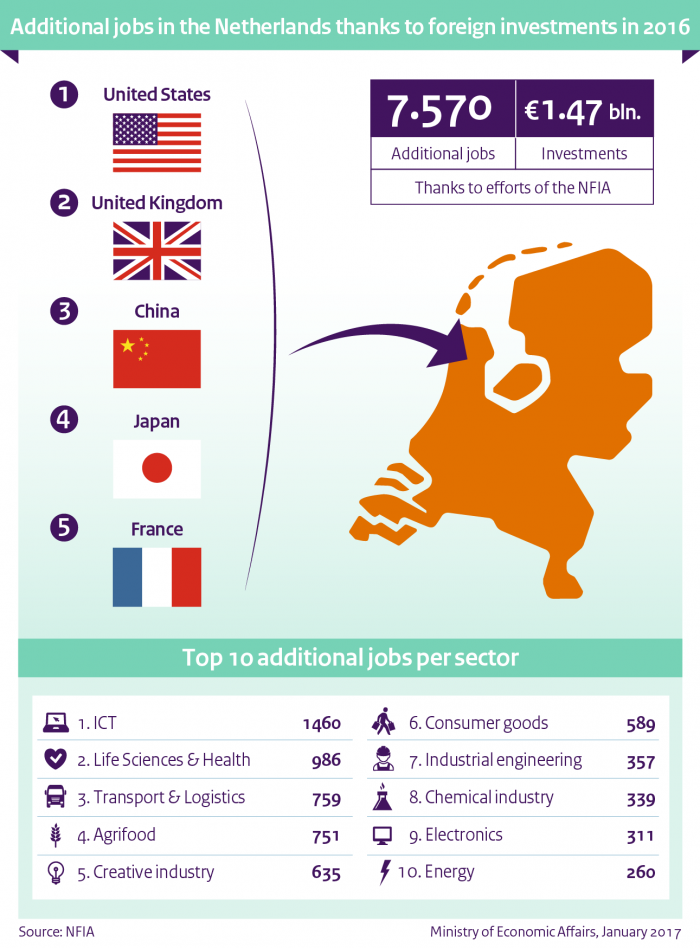 The minister continues: “These foreign direct investments are important for our country. They support economic growth in the Netherlands and provide employment for thousands of people every year. That is why we should make sure we maintain an open economy and a competitive business climate.”

Dutch minister for Foreign Trade & Development, Lilianne Ploumen, who is also partly responsible for the NFIA: “These results clearly demonstrate the added value provided by the the NFIA and Dutch Embassies and Consulates-General worldwide. The Netherlands is an attractive and stable country in which to invest and this is a message we need to communicate pro-actively. We will be hiring more personnel in the United Kingdom this year, to provide optimal support for international companies considering the Netherlands as a base for doing business in the wake of the Brexit. And of course, we would like to achieve outstanding results again next year.”

Within the Invest in Holland network the NFIA was directly responsible for 7,570 out of the 11,398 jobs. In 2016 the NFIA registered a record number of 227 foreign investment projects for the Netherlands, accounting for an investment amount of 1.47 billion euros. The NFIA results show that over the past year most new jobs were created in distribution centers (2,092), in manufacturing (1,475), at headquarters (1,218), and in service centers (1,097). To illustrate, Oracle announced it will be opening a cloud sales center in Amsterdam. Danone has started construction of a new factory for early life nutrition in Cuijk, British online retailer AO World has started distribution activities in Utrecht and global rice specialist LT Foods, based in India, will begin rice processing in Rotterdam for distribution in Europe.

Most investment projects from the United States

Like in 2015, the majority of the jobs have been created by companies from the United States. Last year this amounted to 4,057 jobs, coupled with a total investment amount of 768 million euros. After the U.S., companies from the United Kingdom, China, Japan and France created most employment. As for jobs by industry, most jobs were created in the IT sector (1,460), followed by life sciences & health (986), transport & logistics (759) and agrifood (751).

In 2017 the NFIA will be expanding its capacity in the United Kingdom, the United States and Canada, responding to changing international circumstances. In the year to come, the NFIA will continue to focus on key sectors such as chemicals, life sciences & health, agrifood, high tech systems and IT.