The presence of talent in the neighborhood was the decisive factor in choosing YES!Delft

Tech incubator YES!Delft witnessed the arrival of yet another high-end technology firm on 10 April 2018. The British company Maxeler IoT-Labs was officially welcomed by Delft Deputy Mayor for Economy, Culture and Spatial Planning Ferrie Förster and InnovationQuarter’s Head of Foreign Investments Chris van Voorden. Georgi Gaydadjiev, director of the new branch of Maxeler, was presented with a special welcome plaque to mark the occasion. 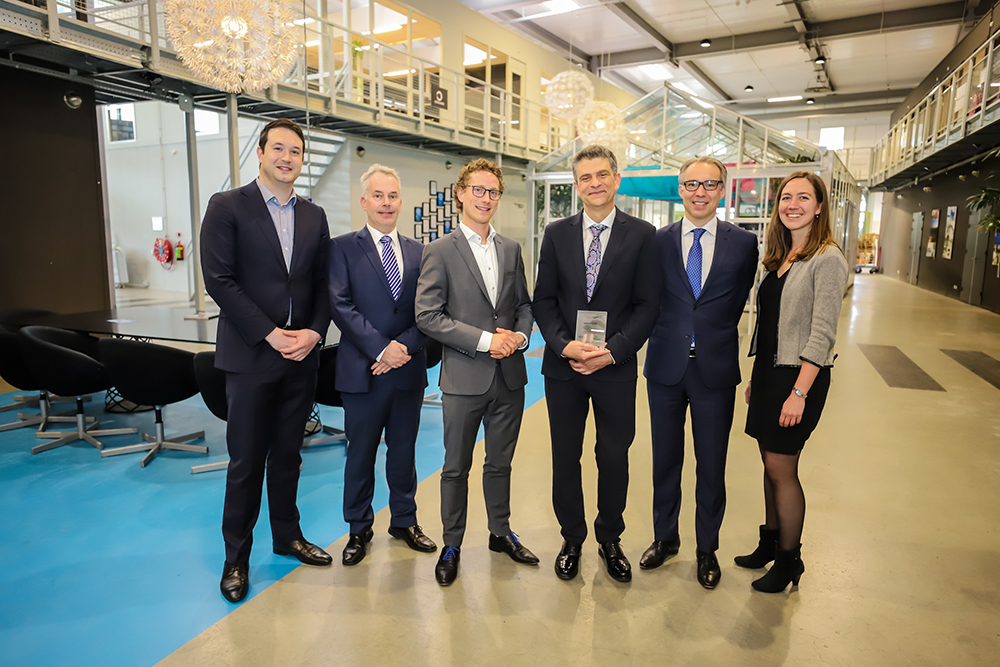 Maxeler was founded in 2003 and has branches in London, UK and Mountain View in California. It builds ultrafast computer systems that offer customized solutions for a variety of very specific problems. The new branch will initially employ three people but expects to have between 10 and 20 employees within three years. For Maxeler, the presence of talent in the neighborhood was the decisive factor in choosing YES!Delft.

Director Georgi Gaydadjiev: “Delft University of Technology is a top European university. Its proximity is vital for ensuring close collaboration and the recruitment and training of talent. Our current collaboration with Stanford and Imperial College has yielded very good results and we want to repeat that success in Delft. With its fantastic facilities, YES!Delft has helped us get our Dutch branch up and running very quickly.”

Georgi Gaydadjiev adds: “We have in the past helped US bank JP Morgan with critical risk analytics calculations for its large investment portfolios. A big computer system needed eight hours to achieve this. We designed and installed a much smaller computer that produces the correct answer every two minutes instead, moreover our system uses significantly less electricity.”

Important role for InnovationQuarter and partners

InnovationQuarter, the Netherlands Foreign Investment Agency (NFIA), Delft Technology Partners (DTP) and the Department for International Trade (DIT) of the British Embassy were involved in bringing Maxeler to Delft. Through the DIT, Maxeler took part in the Cyber Security Week at The Hague Security Campus in 2017. It was here that the company first made contact with InnovationQuarter.

Gaydadjiev says: “InnovationQuarter played a very important role by bringing us into contact with the right parties in West Holland. Together with the British Embassy, they helped us make a quick analysis of the cybersecurity and automotive landscape and identify the important stakeholders. This honed our initial idea for a branch in Delft.”