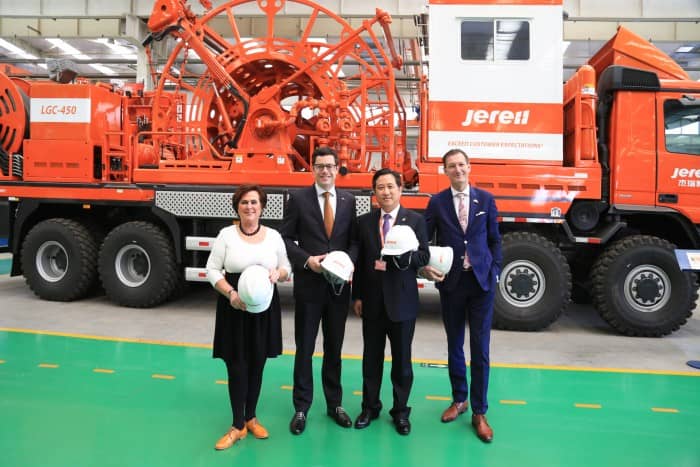 The Hague, 13 April 2016 — Jereh Group, an international, integrated oil and gas company, with subsidiaries all over the world, is to establish a subsidiary in The Hague. Today, Deputy Mayor of The Hague Karsten Klein and CEO of Jereh Group Mr. Weijie Sun signed an official agreement in Yantai, China, confirming the establishment of the subsidiary. WestHolland Foreign Investment Agency (WFIA) together with the Netherlands Foreign Investment Agency (NFIA) advised and assisted in all phases of their expansion.

Jereh is a listed oil and gas equipment manufacturer specialising in oil & gas EPC services, oilfield technology services and environmental management. The company opted for The Hague because of its strong oil and gas cluster, providing a wealth of international industry knowledge and expertise. The Hague is home to Shell, CB&I, Total, Q8 and several other international engineering and consultancy firms. The city of The Hague is therefore ideal for what is to be Jereh’s European head office.

The Hague is delighted to welcome Jereh Group to the city. Deputy Mayor and Alderman for Economic Affairs Karsten Klein says: “Jereh Group brings expertise and new dynamic to our city and actively seeks cooperation with players in the oil and gas industry who are already here. This strong network, alongside the excellent assistance provided by NFIA, WFIA and the municipality, makes The Hague an attractive option for companies such as Jereh Group.”

The Hague office will initially house in WTC The Hague, and will operate as a Marketing & Sales office for its European market. Jereh Group is also intending to set up R&D activities in the West Holland region. It is expected to become Jereh’s most important overseas office, and, over the next three years, the workforce is anticipated to grow to 30.

“From our new base in The Hague, we aim to cooperate more closely with the large oil and gas companies to promote business growth, gain influence and increase our share of the high-end North Sea market,” says Weijie Sun CEO of Jereh Group.

“There were several successful visits to the Jereh Group and we are very pleased that we can welcome the company in The Hague. Jereh Group will significantly contribute to strengthening the developments of new energy in the oil and gas cluster”, says Marleen Zuijderhoudt, Executive Director of the WFIA.

Jereh Group is an international, integrated oil and gas company specialising in oil and gas engineering and construction, oilfield technology services and equipment manufacturing. With 17 years’ experience in the industry, Jereh has evolved to become China’s largest privately-held, listed oil and gas company. Staffed by over 1,200 professional engineers, the company now has eight global R&D centres, encourages technical innovation and strives to be a long-term leader within the industry. Jereh Group has also established 18 international branches that allow for close cooperation with customers in over 60 countries.