The Netherlands Foreign Investment Agency recently gave eight U.S. journalists a behind-the-scenes tour of the Netherlands’ smart and green mobility sector. Over the course of a week, we introduced these media to Holland’s network of electronic engineering, materials manufacturing, smart traffic innovation and autonomous vehicle development. This ecosystem is making the Netherlands a global hub for smart and green mobility. Although the Netherlands does not have its own (OEM) car manufacturer, the country is paving the way for new automotive and mobility technologies developed by several automotive suppliers and knowledge institutes

Holland is home to more than 1,700 firms involved in materials-related R&D. Building on the electronic excellence of Philips, the Netherlands has fostered companies like NXP. The company is now the world’s top automotive chip supplier. Holland was also ranked the No. 1 Most Connected Country in the world by DHL. This ranking emphasized Holland’s excellent infrastructure. With this expertise, it’s no wonder Holland is the No. 1 country on the Automotive Disruption Radar, according to strategy consultant Roland Berger.

The recent press trip included stops at some of the country’s 12 research universities, where the journalists met award-winning student teams. The group also met with leading researchers and city officials that are improving mobility and transportation throughout the country. In addition, we met with startups building autonomous and electric transportation systems. These meetings and tours reinforced the Netherlands’ reputation for successful public-private partnerships.

Below is recap of the stops on our itinerary, each of which examined a different area of smart and green mobility development in the Netherlands. 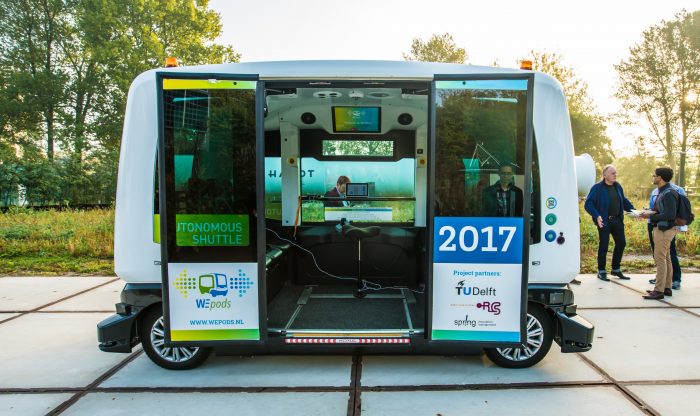 The first stop of our trip was Delft University of Technology (TU Delft), one of the Netherlands’ top research universities. At TU Delft’s RADD lab (Researchlab Automated Driving Delft), the group met with Connekt Netherlands, an independent network for smart and sustainable mobility that unites the private sector and academia with public interest groups. We also heard from WEpod, which has created the first self-driving pod with a license to operate on public roads during normal traffic. Dutch company 2getthere presented its own automated transit systems to the group, including upcoming projects for global cities.

At Helmond’s Automotive Campus, our tour group met with companies working together to test automotive technology and mobility concepts. We heard from TASS International, a Siemens corporation that develops simulation and field test technologies for autonomous and cooperative driving. We also met with Prodrive Technologies, which is developing high-power electronic systems for major automotive brands.

The tour also featured companies that are exploring mobility beyond autonomous vehicles. In Eindhoven, our group met with the VDL Group. VDL has already begun rolling out its fully-electric line of buses on Eindhoven’s streets. Hardt Hyperloop, a startup formed by the winners of SpaceX’s 2017 Hyperloop Contest, presented its plan to make the Dutch hyperloop a reality. 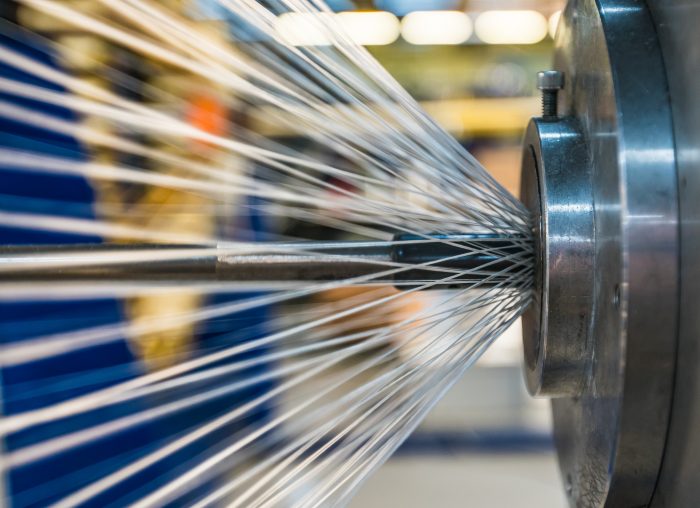 Companies in the Netherlands are developing new materials to make autonomous and electric vehicles smarter and more sustainable. During our tour, we took journalists to Eurocarbon and TPRC (ThermoPlastic Composites Research Center), where companies are using carbon and thermoplastics to create lightweight parts for the body of a vehicle. At the Brightlands Chemelot Campus, Japan-based Sekisui S-lec presented its work on smart glass for the automotive market. The group learned about Holland’s expertise in electronic design while visiting Eindhoven’s High Tech Campus, where companies like Solliance work on thin film solar technologies and flexible electronics at the Holst Centre. These technologies will be used in new interior electronic designs and OLED lighting components integrated in the body of the car. The High Tech Campus is often called the “smartest square kilometer in Europe.”

While at the High Tech Campus, journalists also learned how chip maker NXP is preparing for autonomous vehicles. NXP is currently the top provider of chips to the automotive market. 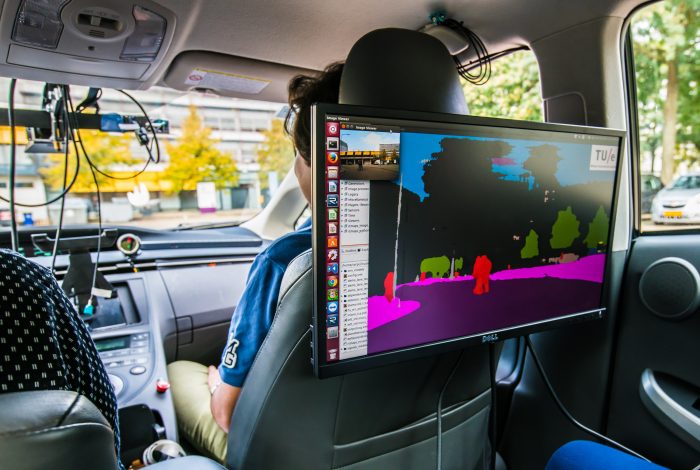 The Netherlands is committed to creating smart infrastructure that supports the future of mobility. The journalists learned about existing mobility projects throughout the Netherlands. With complete 4G coverage and modern infrastructure, Holland is an ideal testing bed. We heard presentations from TU Delft’s Bicycle Lab and the Chief Technology Officer at the City of Amsterdam, who shared the city’s growing plans for smart infrastructure and increased mobility.

In tandem with organizations like Amsterdam Smart City, startups like Next Urban Mobility, e-Laad, Alliander, NewMotion and GreenFlux are working to create a city with ample electric vehicle charging stations, innovative last-mile solutions and a vast mobility-as-a-service network. 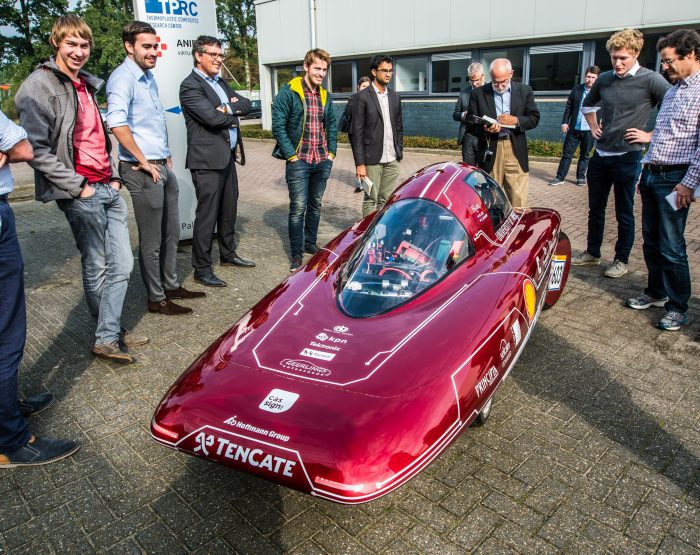 With 12 research universities and a “learning by doing,” mentality, the Netherlands is a breeding ground for creative student teams. In fact, mobility teams from Holland’s universities consistently win international competitions. Our journalists were able to meet with several such student startups and organizations. We met with Green Team Twente, whose hydrogen race car finished first at the 2017 Shell Eco-Marathon. In addition, we met with Solar Team Eindhoven, whose projects include Lightyear, a self-charging solar car.

An emerging leader in the future of mobility, the Netherlands is a hotbed for autonomous vehicle testing, electronic engineering and smart infrastructure projects. We enjoyed sharing the Dutch mobility ecosystem with North American journalists. For example, post-trip coverage includes The Next Web, NPR’s CarTalk, WIRED and more. NFIA looks forward to collaborating with automotive and smart mobility companies. 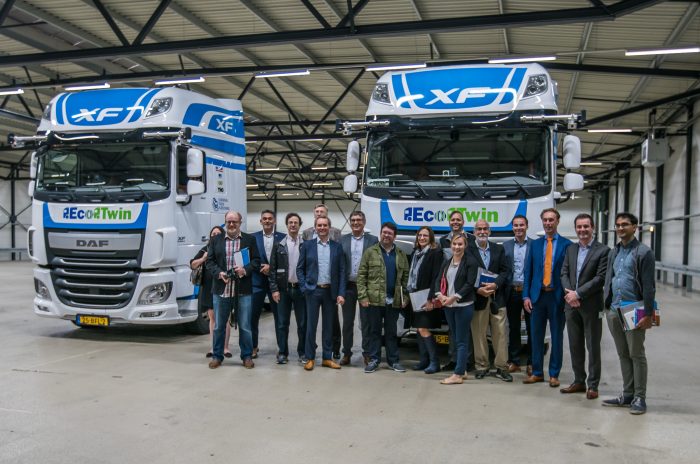 If you are interested in learning more about the Netherlands smart mobility sector, we invite you to contact us for more information about expanding or relocating in the Netherlands.