Utrecht first city in 2020 to experience VodafoneZiggo’s Gigabit network, rest of the Netherlands will follow 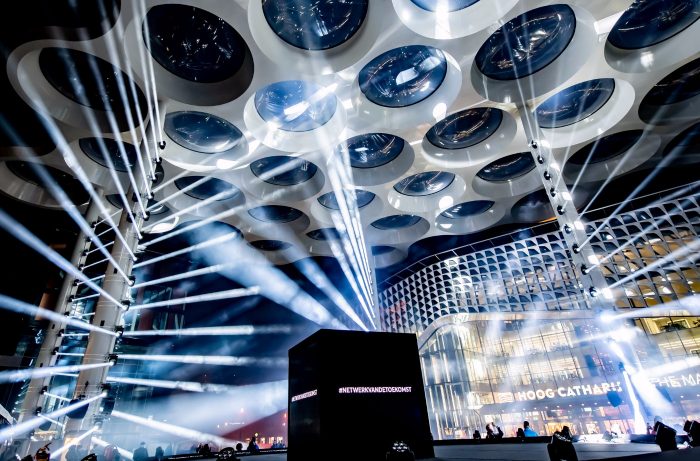 Utrecht will be the first Dutch city to gain access to the new superfast fixed Gigabit network of VodafoneZiggo, as of 2020. The news was revealed by CEO Jeroen Hoencamp during the opening ceremony of the company’s new central office, in the mall Hoog Catharijne. The announcement was accompanied by a spectacular light show and a short performance by Utrecht-born DJ Fedde Le Grand underneath the iconic giant roof of the station square.

Network of the future

As of 2020, VodafoneZiggo will offer the inhabitants of Utrecht access to its fixed Gigabit network. The Docsis 3.1 technology will be brought to their living rooms through the existing cable network. This technology enables superfast internet, more stable connections and improved security. The business world, public sector and health care institutions will also experience huge benefits. Because of the network stability, doctors will be able, for example, to plan virtual reality consultations with patients who are at home.

Internet usage among households, companies and consumers will continue to grow explosively in the years to come. Each year, usage increases by approximately 40 to 50%. For this, additional network capacity is needed. The new network will reach internet speeds of 5 Gigabit per second for downloading and 1 Gigabit per second for uploading. To compare, current speeds are between 150 and 200 Megabit per second.

Jeroen Hoencamp explains: “VodafoneZiggo wants to offer a ‘network of the future’ as of 2020, in which mobile and fixed connections are converged more than ever. Films, videos, music and photos can be downloaded, uploaded and streamed at record speeds; on average up to five times faster than nowadays. This offers endless possibilities. We will start with Gigabit in Utrecht and the rest of the Netherlands will follow.”

The light show ‘Connections’ symbolizes VodafoneZiggo’s network of the future and the ambition to turn Utrecht into the first city with access to the Gigabit network, and thus, the fastest city in the Netherlands. The show was first performed during the opening ceremony.