‘Terneuzen Diamond Centre’ is workplace for 1,100 employees in Zeeuws-Vlaanderen 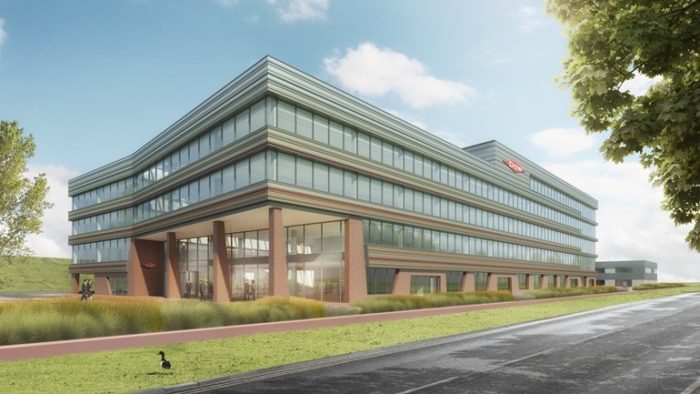 Dow Benelux officially opened its new head office in the Netherlands on 24 April. Dutch Prime Minister Mark Rutte joined Dow CEO Jim Fitterling to unveil the ‘Terneuzen Diamond Centre’ which is located in the Zeeuws-Vlaanderen region of the province of Zeeland.

Employing some 1,100 people, the center makes a significant socio-economic contribution to the region. It houses the Dow Service Centre which brings together various services for the whole of Dow Europe, Africa and India, for example in the areas of finance, customer services and supply chain management. Up to now, many of these departments were spread over several other locations.

North Sea Port in Zeeuws-Vlaanderen is the third largest international port in Europe and located strategically between the ports of Rotterdam and Antwerpen, making it a springboard to the rest of Europe and hundreds of millions of affluent consumers. From an industrial perspective, Terneuzen is one of the main centers of the European chemicals industry.

Referring to the building’s name, Rutte said: ‘In terms of its capacity, design and presence, the building is indeed a regional gem. And what’s more, several hundred extra employees of many different nationalities will also be based here. Reinforcing Dow’s top-ranking position as Zeeuws-Vlaanderen’s biggest employer.’

“This building is an exceptional case even for Dow,” said Fitterling. “It is specially designed so that all employees can work together and, through more interaction, new ideas can arise.”

The office was built according to the latest standards for sustainability and safety. The building is completely gas-free and instead heated with energy from solar panels on the roof and sustainable energy from the grid. Many of the materials used in the building were derived from customers of DOW.

Some 4,000 DOW employees work in Terneuzen. With 17 chemical plants Dow Terneuzen is the second largest integrated production location of The Dow Chemical Company in the world and the largest Dow location in the Benelux. Besides the Benelux headquarters in the Diamond Centre, one of the largest research departments of Dow Europe and the Dow Benelux Integrated Center (DBIC) are also located in Terneuzen.

Chemistry in the Netherlands

One of Europe’s leading suppliers of chemical products and services, the Dutch chemicals sector boasts more than 2,000 leading chemical companies located over 8 major chemical industrial clusters and covering the entire supply chain. In fact, 19 out of the 25 top chemical companies in the world maintain significant operations in the Netherlands.

Major players in the worldwide chemicals industry, such as Dow, LyondellBasell, SABIC, Sekisui, and Teijin, benefit from a superior logistics infrastructure, access to important raw materials, world-class R&D institutes, and a tradition of inter-company integration and regional clustering.