Among the top countries for research and development, the Netherlands provides a unique mix of businesses working alongside world-class knowledge institutes that are changing the future of everything from agriculture to transportation. The country’s highly skilled workforce and attractive R&D incentives offered by the Dutch government further support businesses looking to make the Netherlands their base of operations.

The Netherlands is an innovation leader in Europe, ranking fourth on the 2020 European Innovation Scoreboard of the EU Commission. Its strong digital infrastructure, 14 universities and openness to multidisciplinary and new ways of thinking are just some of the contributing factors that make the Netherlands a top country for research and development. Moreover, Dutch researchers and universities are internationally oriented and well represented in the European Horizon Framework Program. This, among other factors, helps the Dutch remain well connected with what is happening in the Netherlands as well as what is happening in Europe and beyond. As the gateway to the European R&D arena, the Dutch mindset to collaborate across technology fields is vital for breakthroughs in research and innovation.

Innovation happens across the nation, that’s what makes the Netherlands a top country for research and development. The Dutch have ten unique campuses designed to facilitate ground-breaking advances, including Amsterdam Science Park, Campus Groningen, Wageningen Campus, High Tech Campus Eindhoven and TU Delft Campus. These clusters of companies and knowledge institutes offer an excellent opportunity to collaborate and accelerate research and innovation. Each specializes in a host of applications, like agrifood, artificial intelligence or quantum technology.

Look no further than business giants that have tapped into Dutch R&D, like Bosch, Danone, Dow, FUJIFILM, Kraft Heinz and Unilever. They are just a few of the international powerhouses that have established research centers in the Netherlands. Constructive synergy between foreign companies and local Dutch resources – notably the ten innovation campuses – results in lasting relationships that are shaping the future.

The Dutch government offers R&D incentives for companies pushing boundaries in the Netherlands. WBSO allows companies to lower the wage costs for R&D and other R&D costs and expenditures, such as prototypes or research equipment, while the Innovation Box results in a 7% tax rate for income related to patents and associated development. The Innovation Credit provides assistance to companies in the development phases of new products or services. SEED capital is available via loans or venture capital funds, and the Dutch Venture Initiative II is a 200-million-euro fund supported by the Dutch Ministry of Economic Affairs and Climate Policy, all of which contributes to supporting new thinking and innovation across the Netherlands.

The Netherlands is one of Europe’s largest start-up ecosystems. The country is renowned internationally for its open culture and emphasis on entrepreneurship and innovation, which have created a vibrant and collaborative startup ecosystem. As the inventors of Wi-Fi, Bluetooth and the microscope, the Dutch are early adapters for tech and innovation. Today, the country is a hotspot for developing new concepts, products and services, and the flourishing startup scene results in a large number of patents every year. A testament to that, Dutch inventors and researchers are among the most active patent applicants at the European Patent Office (EPO) where 3D printing is involved.

As the European R&D location of various major multinationals, the Netherlands has the second highest number of patent applications per million inhabitants in Europe, according to the EPO. Moreover, it also ranked No. 4 in the latest NimbleFins Best European Countries for Startups 2020, while Amsterdam was ranked the No. 3 startup ecosystem in Europe by Startup Genome. 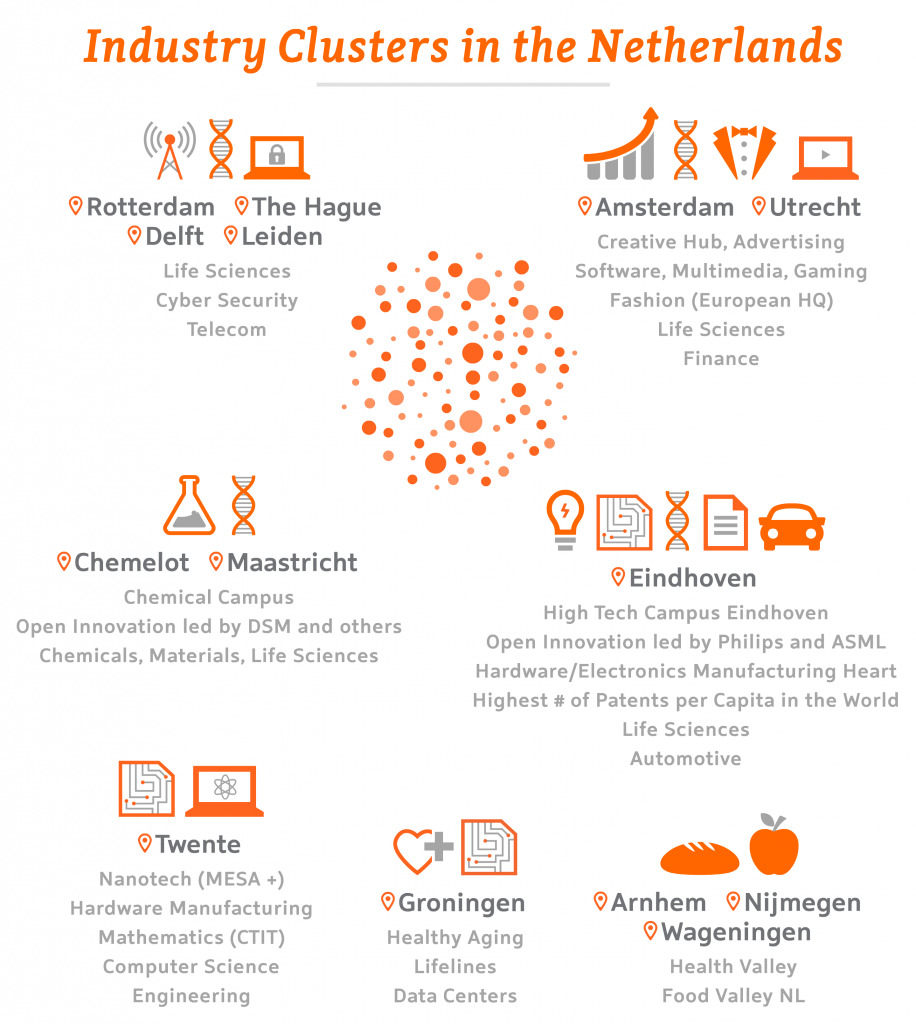 Research & Development Companies In The Netherlands