The Digital Gateway to Europe: the Netherlands is a Digital Leader

As Europe’s most wired country, the Netherlands is one the best countries for tech companies. Businesses that invest in the Netherlands’ technology and IT sector thrive, thanks to the tech-savvy, multilingual Dutch workforce, the great digital infrastructure, an innovative and open culture, R&D incentives and the strong focus of the Dutch government on developments in tech. As consumers, the Dutch are digital frontrunners who lead the way in embracing new digital applications.

The Netherlands’ technological environment is anchored by a robust digital infrastructure. The Dutch rank No. 2 in the world for online connectivity, with 98% of households having broadband connection. The Netherlands is also home to the Amsterdam Internet Exchange (AMS-IX), one of the world’s leading digital data distributors. This advanced network allows companies to stay digitally connected and reshape the future. It also powers work-from-home connections which encourages a healthy and flexible work-life balance.

IT leaders choose the Netherlands

From startups to multinationals, IT companies of all sizes tap into the Netherlands’ technological environment. Tech companies from around the world find success across different activities and locations in the Dutch IT industry. Major players like IBM, Microsoft, Google, NTT, and Oracle chose the Netherlands for their European headquarters, customer service centers, R&D facilities and more.

The Dutch recognize that AI, fueled by big data, is a key driver of opportunity in the 21st century. In 2019, the Dutch government launched the Strategic Action Plan for AI. The plan introduced three pillars to: capitalize on the societal and economic opportunities of AI, advance AI knowledge through R&D and human capital and safeguard the public interest by establishing ethical guidelines in AI. Additionally, the NL AI Coalition unites government, industry, knowledge institutions and civil society to accelerate AI developments in the Netherlands. Companies active in AI, such as ABB, Brain Corp and Wonderkind are putting down roots in the Netherlands’ technology-driven economy as their testing ground in this quickly growing industry.

Fulfilling its role as a global beacon of peace and justice, the Netherlands is a leading cybersecurity hub in Europe. The Dutch central information hub and center of expertise for cyber security is the National Cyber Security Centre (NCSC). The NCSC encourages cooperation between the government and businesses to enhance the digital resilience of the Dutch society. Attracted by this strong ecosystem and by the excellent digital infrastructure, many international security agencies like Europol and NATO established their operations here.

The Netherlands is also home to Europe’s largest security cluster, The Hague Security Delta (HSD). HSD is a national network of more than 300 public and private organizations working together to accelerate cybersecurity solutions. Drawn to this network, cybersecurity companies like FOX IT, Thales and Palo Alto invest in the Netherlands’ technological environment.

Crossovers in every sector

Collaboration is at the heart of the Netherlands’.   The intersections between tech and other industries are a result of this. For example, smart farming and agtech are making the Dutch agrifood sector more sustainable. On the creative side, the Dutch gaming industry leads in simulation and ‘serious’ gaming – digital games designed for acquiring specialized skills or knowledge. Medtech and eHealth have become critical subsectors of the Dutch life sciences and health industry. Technology also supports the Netherlands’ chemicals clusters and high-tech sector in their efforts to build a sustainable, circular economy. 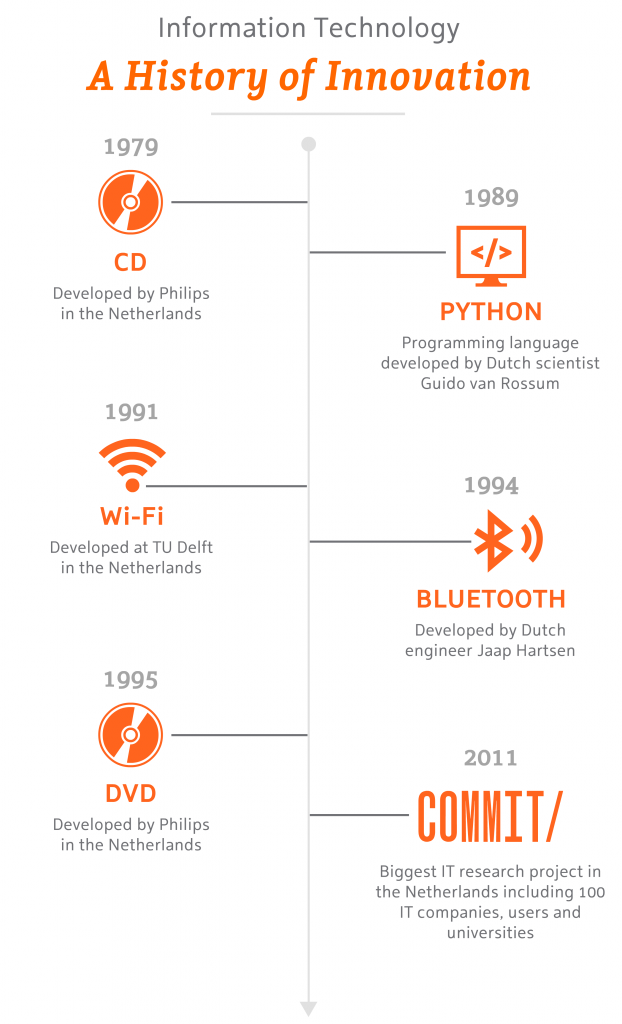