Home • Why Invest • Quality of Life

Life in the Netherlands

On 30th April 2013, the day when “the Queen had resigned and it was the King’s first day at work” British writer Ben Coates was in Amsterdam noticing a typical Dutch phenomenon. “The Dutch capital had been hit by a serious outbreak of what the locals called, whose chief symptom was to urge to cover oneself from head to toe in bright orange clothing.” In the preface to his book “Why the Dutch are different?” Ben Coates describes a scene that is recognizable to all the Dutch around the globe. We Dutch are worldly, outgoing and industrious but we also like an opportunity to have a good party and dress up in the national color.

Living in the Netherlands means embracing a healthy work-life balance. Dutch employers and employees share the idea that a healthy work-life balance makes employees more motivated and productive. And it shows: part-time labor is popular in the Netherlands and the efficiency of Dutch workers is extremely high compared to other European nations according to the OECD. The Dutch value their time off, and employers offer a vacation stipend as part of salaries. The Dutch concept of niksen, literally meaning ‘doing nothing’, can boost one’s creativity and help prevent burnout by taking time to relax. A good work-life balance has the effect of making people feel refreshed and motivated.

Children living in the Netherlands are amongst the happiest in the world. It could be thanks to the famous Dutch chocolate sprinkles, Hagelslag, which are fully accepted for breakfast and lunch multiple times a week. Or, on a more serious note, the high level of happiness could be in part due to the Netherlands’ effective educational systems. US News ranks the Netherlands in the top 10 for education worldwide, with its universities consistently ranked as some of the world’s best and with 13 Dutch centers of higher education featuring in the Times Higher Education rankings. A healthy public education system and quality international schools help create a secure environment for families and their children.

Dutch cities and villages are equipped with a network of cycle lanes that are so safe and comfortable that even the youngest and the oldest riders use bikes as the easiest mode of transport. In addition to increasingly demarcated bike paths to make transportation safer, life in the Netherlands is generally safe and calm. Only 1.4% of the population over 15 often feels unsafe according to Netherlands Statistics in 2019.

The Netherlands ranks second in the 2018 EHCI (PDF) ranking for best healthcare system, with equitable access to high quality services. There’s also a great pension system for later in life. Melbourne Mercer Global Pension Index (PDF) ranks the Netherlands as the best nation for pension and only Denmark also received an A-grade in 2019.

Gezellig, another essential Dutch concept, means cozy, but also embraces the idea of togetherness and a welcoming environment. Living in the Netherlands will illustrate this idea, where social and work environments function together, for local Dutch residents and foreigners alike. The Netherlands invites internationals with its 11 Expat Centers across the nation, providing a soft landing for families, whether it’s finding the right place to live or schools for children, so that they will be proud to call the Netherlands home. 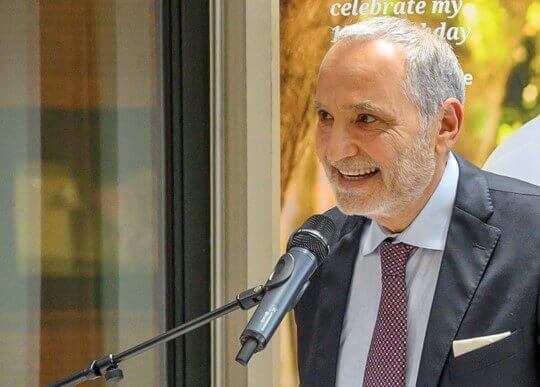 "Our team is a blend of different cultures and backgrounds. Some were already living in the Netherlands, but others have moved here recently. I’m delighted to say that everyone, regardless of their origins, has settled happily in the Netherlands; it’s been easy to find accommodation and they have discovered a friendly, supportive community here." Luciano Manzo President and CEO Make-A-Wish