Dutch Ambassador to the U.S. André Haspels visits sustainable packaging company in Atlanta to promote foreign investment in the Netherlands 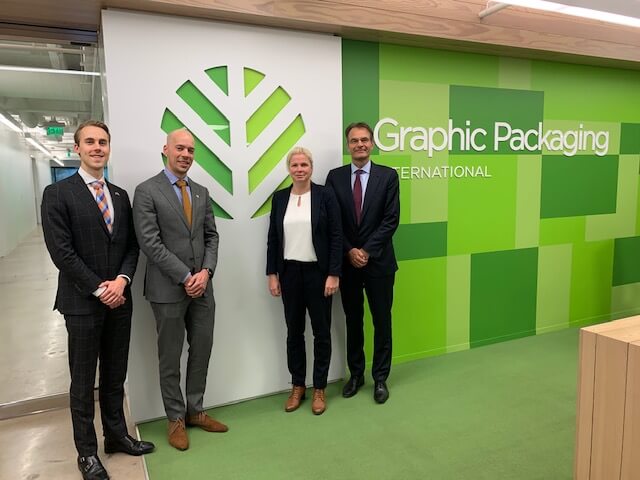 “It’s great to visit a company that embodies the excellent trade relations between the United States and the Netherlands. And it’s good to see firsthand how American and Dutch partners cooperate and contribute to the vibrant economic ties between our two nations,” said Haspels.

“The U.S. is the biggest investor in the Netherlands, and the Netherlands is among the top ten – ranking fourth last year – investors in the United States,” he noted.

During the trip, Ambassador Haspels also visited the Dutch consulate in Atlanta as well as the Atlanta office of the Netherlands Foreign Investment Agency (NFIA). In turn, NFIA arranged the Ambassador’s meeting with GPI, a highly respected and valued investor in the Netherlands since 1946.

Based in Atlanta, GPI operates worldwide and is one of the largest carton manufacturers in the United States and Europe. Many globally renowned companies in the food and beverage industry are GPI customers. Out of 14 converting sites across Europe, GPI has chosen to invest in two locations in the Netherlands.

For several decades, GPI has committed to foreign investment in the Netherlands due to the talented Dutch workforce. The company relies on qualified Dutch professionals capable of advancing innovation and operating high-tech machinery. For example, GPI’s production facility in Sneek is home to one of its four Global Innovation Centers as well as a new high-tech machinery system, the only one of its kind in Europe.

Expanding European Logistics Operations Based in the Netherlands

Furthermore, GPI has chosen the Netherlands as a main hub of its European logistics operations. The company currently serves the Benelux region out of its distribution center in Bergen op Zoom, with plans to expand to the rest of Europe.

Finally, GPI has turned to the Netherlands to pursue new sustainable packaging solutions as the food and beverage industry transitions toward a planet-friendly future. One of the company’s latest innovations – a sustainable solution for paperboard packaging – will be manufactured in the Sneek production facility. GPI joins a growing list of global businesses that have found unique opportunities to reduce their environmental footprint in the Netherlands.

As a company with a rich and dynamic history in Europe, GPI epitomizes the longstanding ties between the United States and the Netherlands. Ambassador Haspels’ recent meeting with the Atlanta-based company demonstrates how NFIA helps companies to build vital connections with the Dutch government and make the right choice when deciding to invest in the Netherlands.

RT @MDuitemeijer: In less than two weeks, over 4500 participants applied from 49 states and 96 countries to join the MIT COVID19 challenge.…