Holland is a Top 5 Country for Expats 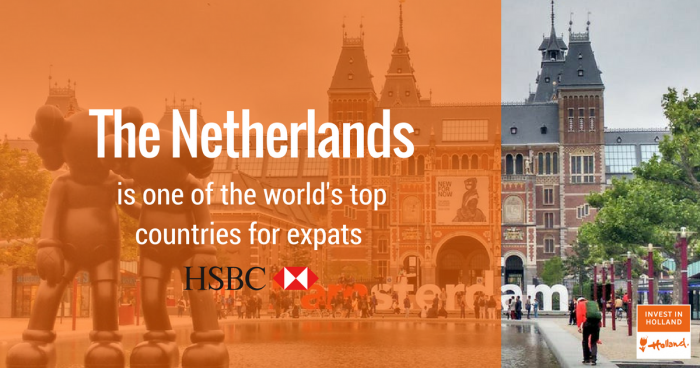 The Netherlands is one of the world’s best countries for expats, according to HSBC’s Expat Explorer report. Holland ranked as the best destination for families. In fact, 76 percent of expats said the health and wellbeing of children in Holland was better than at home.

“With its world-famous cities and strong economy, the Netherlands has been a popular expat destination for centuries,” said HSBC.

The Expat Explorer rankings consider economic strength, opportunities for families and lifestyle. HSBC based its findings on interviews with nearly 30,000 expats. Holland made impressive gains on this year’s report, rising ten places from last year.

HSBC’s expat guide for the Netherlands explains: “Most expats head for the Randstad, a conurbation of just over seven million people that includes the country’s four largest cities – Amsterdam, Rotterdam, The Hague and Utrecht.”

In addition to opportunities for families, the Netherlands offers a strong, stable economy. Holland ranked in the top ten for its local economy and career opportunities.

To make expats a priority, Holland is increasing international education. In fact, three new international schools opened this September in the Amsterdam region. Last academic year there were more than 112,000 international students in the Netherlands

Holland’s highly-skilled migrant visa and special “startup visa,” continue to attract talented expats. The regulation makes it possible for ambitious entrepreneurs outside of the European Union to apply for a temporary residence permit for the Netherlands.