Tilburg/Amsterdam (March 27, 2015) — Major Chinese telecommunications and IT company Huawei is set to locate its logistics center for Europe in Eindhoven. Huawei views Brabant as the perfect gateway to Europe and is keen on connecting with the high-tech sector in the region. Founder of Huawei Technologies, Ren Zhengfei, announced today that Eindhoven had been chosen during a visit by Dutch Prime Minister Mark Rutte to the head office of Huawei in Shenzhen. Huawei stated that, of the locations considered in Western Europe, Eindhoven was the best choice. 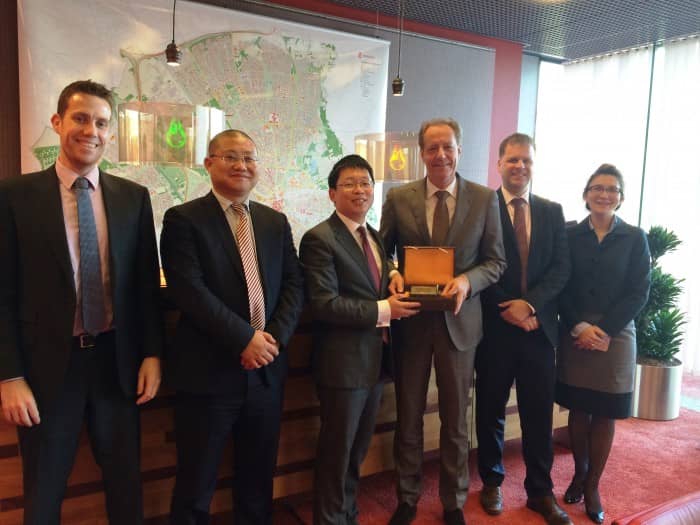 “The fact that Huawei decided on this region once again demonstrates how appealing Brabant is in logistical terms,” said Eelko Brinkhoff, head of the BOM Foreign Investments division. “Brabant is located strategically in northwest Europe, with 300 million consumers within a radius of 500 kilometers. The proximity of the major ports of Rotterdam and Antwerp, excellent infrastructure, the availability of qualified staff, the range of high quality logistical property and the presence of all the major logistics providers are all important conditions for creating European distribution centers. With American Eagle, Tesla, Forever 21 and Welch Allyn all recently setting up shop here, that is proof enough that Brabant is the logistics hotspot of Europe. We are proud that the innovative Huawei company has also settled on Brabant for its operations. This is also another confirmation of the potential of China, after investments of Opple Lighting, Mapscape and Shanghai Prime in 2014.”

The Eindhoven logistics center will serve for the storage and continent-wide distribution of IT products and smartphones, for which Huawei has contracted the Dutch branch of DHL. The three-year contract will commence on May 1, 2015. The warehouse space comprises 10,000 square meters and can be extended as and when necessary. It is expected that 50 to 70 people will be employed in the center.

Huawei’s new logistics center in Eindhoven will give the company the opportunity to explore further options for connecting with the high tech cluster in Brabant. CEO of Huawei Netherlands, Wonder Wang, confirmed that this is their intention. “Aside from the great infrastructure and Brabant’s excellent location in Europe, Eindhoven also appeals to us because of developments in the fields of smart cities, smart environments, and smart mobility,” he says. “Where possible, we would like to be a part of this.”

Mayor Rob van Gijzel has welcomed Huawei to the city. “Huawei fits in with the high tech profile of the Brainport region of Eindhoven and it can rely on a welcome approach from local companies and knowledge institutions when it comes to collaborative projects,” he said. A Huawei delegation called on the Eindhoven city hall earlier this month where they met Mayor Rob van Gijzel. Aside from talks on the new logistics center, they also looked to the future, inspired by what Huawei could add to the Brainport Eindhoven high tech cluster, and what the cluster could do for the company.

The decision to locate the logistics center in the region was thanks in part to the work of the Brabant Development Agency (BOM), Brainport Development, and the NFIA (Netherlands Foreign Investments Agency).

Huawei is a leading IT services provider. Huawei is dedicated to creating maximum value for telecommunications operators, companies, and consumers through its competitive solutions and services. Its products and services are used in over 170 countries, serving over one-third of the world’s population. Huawei employs a workforce of 620 in the Netherlands, where it also works with telecommunications and IT companies. It presently has three branches in the Netherlands and its national head office is in Amsterdam.