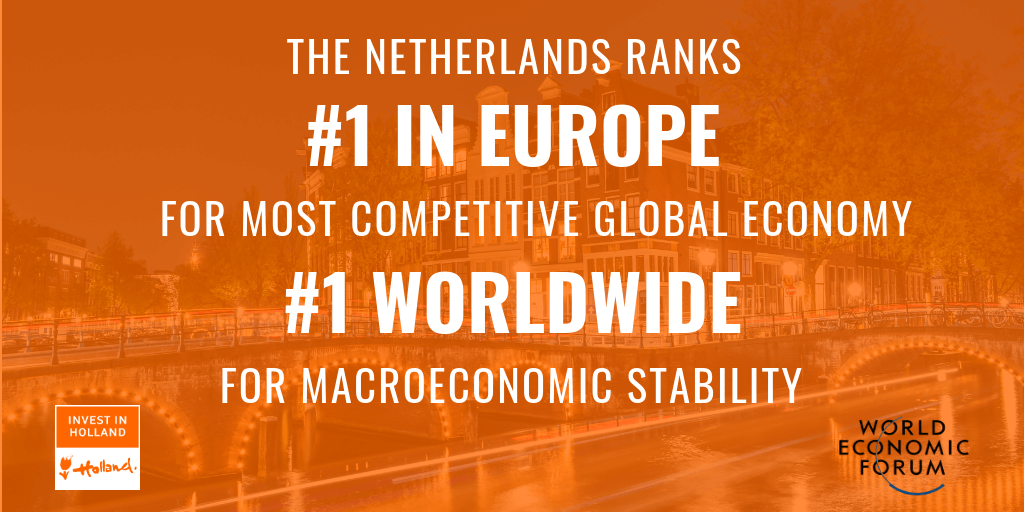 The Netherlands has the most competitive economy in Europe for the first time. Worldwide, only Singapore, the United States and Hong Kong are ahead of the Netherlands, according to the 2019 ranking of the Global Competitiveness Index prepared by the World Economic Forum (WEF).

The Netherlands is most stable macroeconomic country

The WEF ranks the Netherlands highest in the world for macroeconomic stability and the report also sees the country performing particularly well in infrastructure and business dynamism.  In 2016 and 2017, the Netherlands ranked as the most competitive economy in the European Union however Switzerland took first place in Europe as a whole.

The Netherlands State Secretary for Economic Affairs and Climate Policy, Mona Keijzer , said: “The WEF report states that ‘the Dutch economy has become much more dynamic’ and that ‘our infrastructure, the functioning of the government including economic policy and the increased growth of innovative companies’ are world class.”

Keijzer said these are fine and deserved compliments for Dutch entrepreneurs, their employees and our knowledge institutions. “But we will have to continue to invest in innovation, in the both the public and private sectors, in order to maintain that top position and thus our jobs and income in the future.”

Keijzer stressed the importance of Dutch government, businesses and knowledge institutes to together develop new technologies such as AI to help the Dutch economy to continue to grow.

“In the future, too, the Netherlands must find an answer to the economic and social challenges facing us. It is not only the search for sufficiently trained staff that will increasingly determine the pace of future economic growth. New technological, often digital challenges such as artificial intelligence (AI), photonics, quantum, nano and biotechnology) require a strong public-private partnership,” Keijzer said. The government has recently announced a new policy for technological innovation and funding facilities will be announced this fall.

Keijzer further noted that a focused Dutch approach is necessary because established and emerging economies in Asia are changing the international playing field. These countries are developing their knowledge economy at a rapid pace and thus increasingly form competition for the Netherlands and therefore its jobs and income.

“However, the current ranking in the Global Competitiveness Index shows that the Netherlands is well-positioned to be able to cope with that competition,” Keijzer said.