The Netherlands Prime Minister and Flanders Minister-President Meet with U.S. Executives in Atlanta 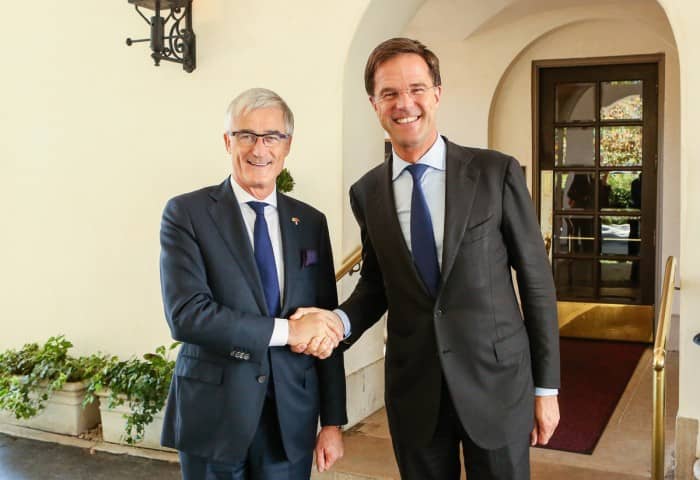 ATLANTA (October 7, 2015) – Prime Minister Mark Rutte of the Netherlands and Minister-President Geert Bourgeois of Flanders, Belgium visited the Atlanta region this week for an economic mission to promote the strong business and cultural ties between the Netherlands-Flanders region and Atlanta.

During the mission, the Prime Minister and Minister-President invited top executives from the Atlanta region to an investment luncheon, hosted by the Netherlands Foreign Investment Agency (NFIA) and Flanders Investment and Trade (FIT). Companies with existing operations in the Netherlands-Flanders region were represented at the event, including Coca-Cola, Delta, Graphic Packaging, Infor, Interface, ICE (Intercontinental Exchange), Mohawk and UPS.

The community of Dutch and Flemish companies in the Atlanta region continues to grow, with new investment announcements being made during the mission by Dutch-based companies Backbase, a financial technology firm, and Fokker Aerostructures, an aircraft systems manufacturer. On top of that, Flemish steel wire manufacturer Bekaert is at this very moment reinvesting $29 million in its production plant in Rome, Ga. while Aluvision, a manufacturer of modular aluminum systems, is about to open a 30,000-square-foot production facility in Duluth, Ga.

Other activities included in the mission’s agenda were meetings with Georgia Governor Nathan Deal, Atlanta Mayor Kasim Reed, Ambassador Andrew Young, the Federal Reserve Bank of Atlanta and the Atlanta Chamber of Commerce.

The NFIA maintains U.S. offices in Atlanta as well as Chicago, Boston, New York City and San Francisco, whereas FIT is based in New York, Chicago, San Francisco, Los Angeles and Atlanta. For more information, visit www.investinholland.com and www.investinflanders.com.

Born in Amsterdam, Dutch #startup Lalaland is on a mission to transform the online #ecommerce experience. Learn how the company is making the fashion industry more sustainable and inclusive from within the Netherlands' startup ecosystem. #InvestinHolland https://t.co/FabdlSQzF6