The Netherlands: Where Media and Broadcasting Companies Thrive

With its ability to unite cutting-edge creatives, the Netherlands offers media and broadcasting companies the perfect place to expand or relocate within the EU. Holland’s ideal location, innovative attitude and multilingual workforce have given it a reputation as a go-to destination for international creative companies.

The Netherlands is a hotspot for major creative services companies like Netflix and Discovery, in addition to advertising and marketing agencies like WPP and Wieden + Kennedy. It comes as no surprise, then, that the Netherlands is a global innovator with more creative output than almost any other country in the world. As a whole, Holland fosters a culture of creativity and an environment where media and broadcasting thrive. 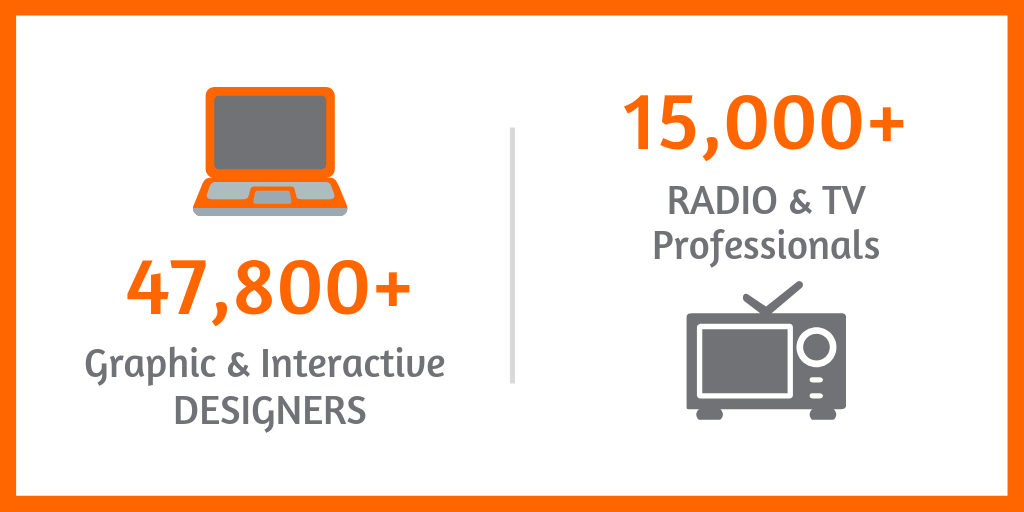 Throughout Holland, there are thousands of creative services professionals that make up the backbone of the media and broadcasting industry. Over 172,000 people work in Dutch creative industries, resulting in 7.1 billion annual turnover. Of these people, 47,800 are graphic and interactive designers, 65,000 are in the Dutch advertising sector and 15,000 are radio and TV professionals. Many of these workers are also multilingual, proving the Netherlands’ skillset as a global content producer. In fact, the Netherlands was ranked at the top of the EF English Proficiency Index for its second-language skills. Multilingual employees are an especially important asset for international companies like Netflix and TVT.

A Global Leader in the Creative Services Industry 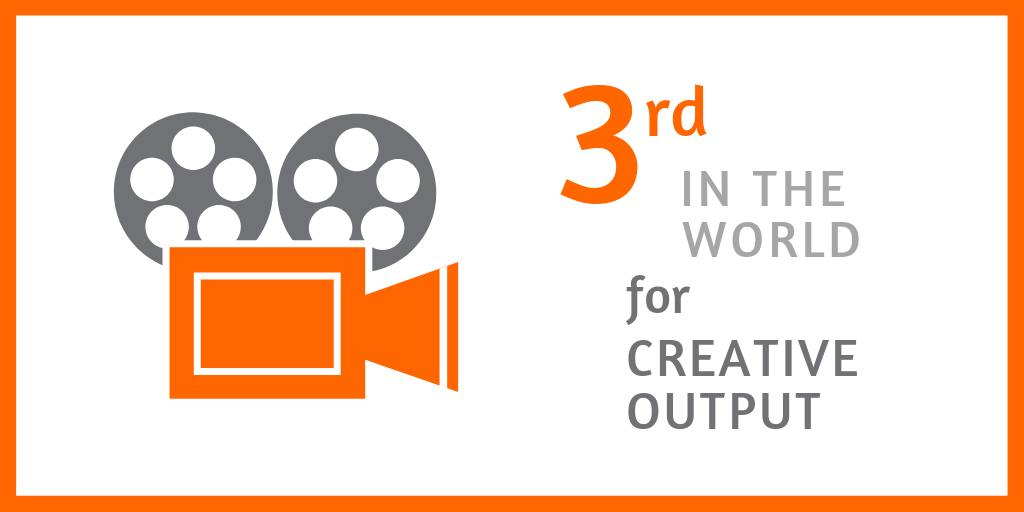 Did you know that the Netherlands is ranked third in the world for creative output? It’s true – we prove our commitment to creative services by producing plenty of high-quality media content. The Netherlands is the third-largest exporter of TV formats, and the Dutch Media Authority oversees 500+ commercial licensed TV programs. The Netherlands is home to approximately 100 media service providers. Amsterdam’s media, advertising & design companies alone generate €4.3 billion in annual sales.

An Ideal Location Within Europe 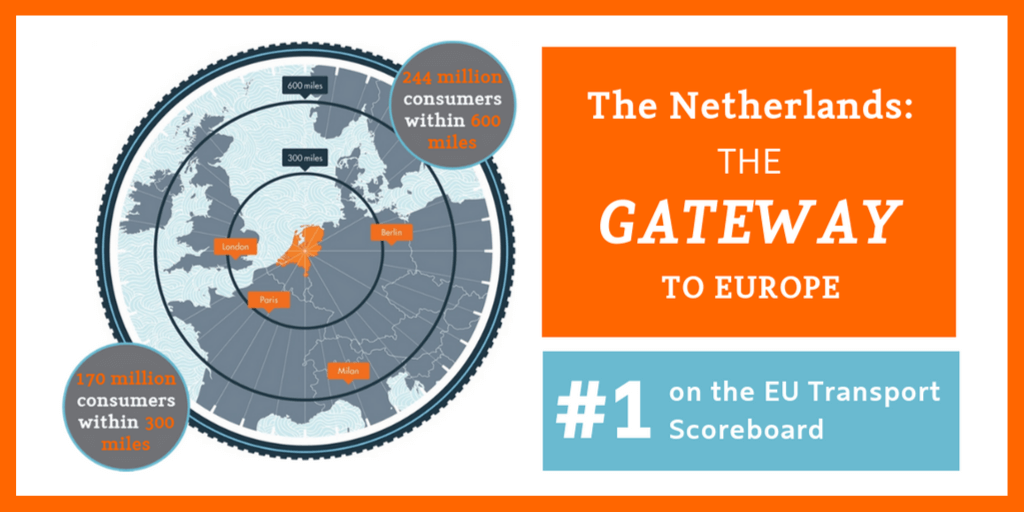 Known as the “Gateway to Europe,” the Netherlands is a strong exporter of media and broadcast content. Additionally, we’re situated in the middle of the three largest European advertising and media markets – the UK, France and Germany. Aside from its ideal geographic position, the Netherlands also has a large skilled workforce population to support a plethora of media and broadcasting job opportunities. 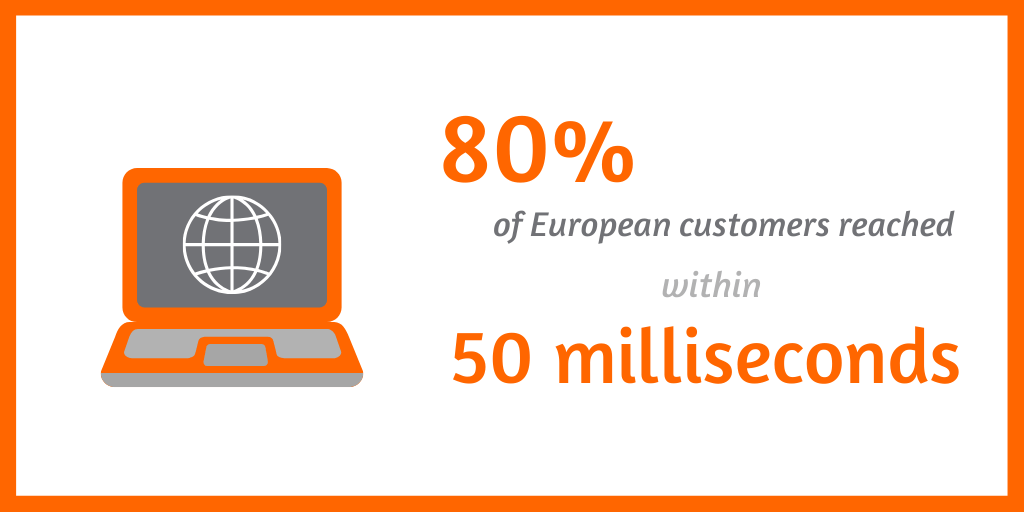 The Dutch digital infrastructure is strong and reliable, recently topping charts in the EU for its high-performing internet speed. In fact, the Amsterdam Internet Exchange (AMS-IX) is one of the world’s leading internet exchanges, making Amsterdam one of the most digitally connected cities in Europe. Its infrastructure can reach 80 percent of European customers within 50 milliseconds – a huge advantage for media and broadcasting companies.

A Surplus of Media and Broadcasting Success Stories 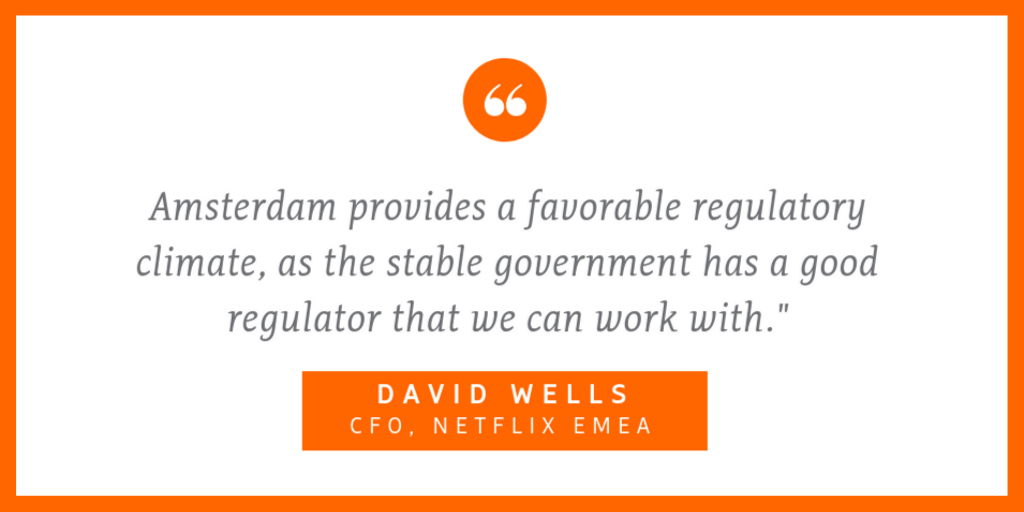 Within the last few years, the Netherlands has seen a variety of media and broadcast expansions. Global streaming service Netflix established its European headquarters in Amsterdam in 2015, expanded with a new customer service center in Amsterdam in 2017. Most recently, Netflix announced it will double its Dutch presence with a new headquarters in Amsterdam, which will enable the company to double the amount of staff and make decisions quickly on the ground. It also committed to producing new Dutch content.

In January 2019, Discovery announced that it would establish a European operational headquarters in the Netherlands. In March 2019, Ridley Scott Creative Group announced plans to open a new office in Amsterdam. “The industry in this city aligns with our focus on creativity and entertainment and provides the perfect location for our European office,” said Ross Plummer, Managing Director Amsterdam, Ridley Scott Creative Group. Global production company NEP Group officially opened its brand new data center in Hilversum earlier this year as well. Meanwhile, TVT Media recently chose to relocate many of their operations from London to Amsterdam partly because of Brexit.