The Netherlands Climbs to No. 3 in the Digital Economy and Society Index 2022

The country continues to progress as a digital frontrunner, despite already high scores 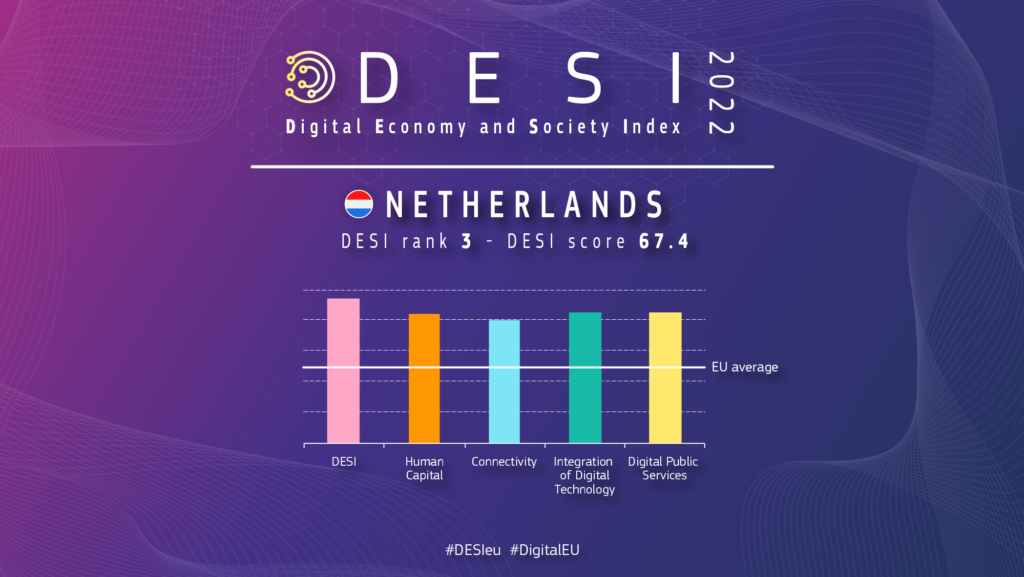 The Netherlands ranks third in the European Union (EU) on the 2022 Digital Economy and Society Index (DESI). The country, which held the No. 4 spot in the two previous annual rankings, continues to foster innovation as it prioritizes digitalization on a national scale.

Specifically in key areas, the Netherlands ranks second for human capital and for connectivity, and fourth for integration of digital technology and for digital public services.

“The country has been a consistent top performer in the EU and is, despite its already high scores, still able to make progress in some key areas,” noted the European Commission in this year’s report.

Digitalization is a key focus and strength of the Netherlands. In fact, the Dutch Digital Strategy (DDS) – written in 2018 and updated annually – brings together all related digital policies under the government. An inclusive digital transition is of utmost importance for Europe and the world. This ambition stands true as was reaffirmed earlier this year.

“As the fifth-largest economy in the EU and a top performer in the DESI rankings, the Netherlands’ progress in the digital transition over the coming years will be crucial to enable the EU as a whole to reach the Digital Decade targets by 2030,” also noted the European Commission. “Among other things, the DDS stresses the importance of an inclusive digital transition in which everyone takes part and it singles out the Netherlands’ position as a digital frontrunner in Europe and the world.”

The Netherlands is not just planning for a digital future but intends to invest 20 billion euros in the transition through its National Growth Fund. To date, 960 million euros have been allocated to projects in quantum computing, artificial intelligence (AI), and life sciences and health. Investments of hundreds of millions of euros have been recommended for even more digitally focused projects. These investments will prioritize future growth areas such as innovation, research, and knowledge development.

It’s not just the innovation and digitalization that sets the Netherlands at the forefront, but rather how the Dutch put these skills to use in the broader economy. The Netherlands is a place where businesses can accelerate to benefit people and the planet.

The DESI is an annual report published by the European Commission that “summarizes indicators on Europe’s digital performance and tracks the progress of EU countries.” The report has been published annually since 2014 and scores countries based upon dimensions including human capital, connectivity, integration of digital technology and digital public services.