For ten years in a row, the Netherlands takes the spot in the top three of the EF English Proficiency Index 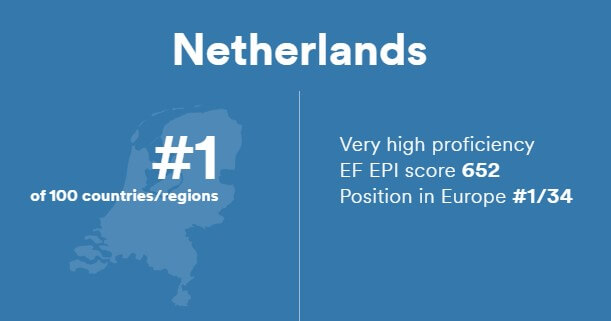 According to the EF Education First report, a high English proficiency does not only count as a competitive advantage. EF suggests that it is equally significant for the connections it enables. English proficiency broadens horizons, lowers barriers, and speeds information exchange. Speaking English today is all about connection.

Socially connected to the world

The report shows a very strong correlation between a country’s global connectedness and its level of English. According to the report, there is an increasingly clear relationship between a society’s connectedness to the world and the level of social and political equality experienced by its citizens. EF says that closed societies turn inwards and nurture rigid hierarchies, and open societies look outwards. They are flatter, fairer places. English, as a medium of international connectivity, correlates well with measures of both equality and engagement with the outside world.

With the high English proficiency in the Netherlands and a forward-thinking culture, Dutch innovators break the mold time and again. Work structures in the Netherlands eschew hierarchy, giving workers more flexibility and removing barriers to benefit companies that engage with Dutch work. Living in the Netherlands will illustrate this togetherness and a welcoming environment. Social and work environments function well together, for local Dutch residents and foreigners alike.

According to the EF report, English proficiency correlates positively with several key measures of innovation. Cutting-edge scientific research today proceeds through complex, collaborative projects. The days of individual labs working on their own is coming to an end. Leveraging the resources of teams in different labs is often a requirement for funding.

It is not surprising to see that Dutch researchers and universities are internationally oriented and well represented in the European Horizon Framework Program. This, among other factors, helps the Dutch remain well connected with what is happening in the Netherlands as well as what is happening in Europe and beyond. As the gateway to the European R&D arena, the Dutch mindset to collaborate across technology fields is vital for breakthroughs in research and innovation.

Accessing ideas from around the world

Now more than ever, communication is playing a crucial role connection between businesses and people around the world. As Dr. Christopher McCormick, EF Executive Vice President for Academic Affairs, highlights: “While 2020 has been a challenging year, the circumstances have also highlighted the importance of clear communication and cooperation across borders. English as a global lingua franca plays a big role in bringing people together.”

As shown in this and in previous editions of the EF report, there are correlations between English and various measures of investment in R&D. English is the principal language of international collaboration. English-speaking teams attract more diverse talent and access ideas from around the world. They are also more likely to collaborate internationally within their own organizations. The Dutch workforce is highly educated, productive, diverse and multilingual.

EF Education First is an international education company that focuses on language, travel, cultural exchange, and academics. Founded in 1965, EF’s mission is “opening the world through education”. EF is the Official Language Training Partner for the Tokyo 2020 Olympic and Paralympic Games.

The EF EPI is based on test scores from the EF Standard English Test (EF SET), the world’s first free standardized English test. The EF SET has been used worldwide by thousands of schools, companies, and governments for large-scale testing.