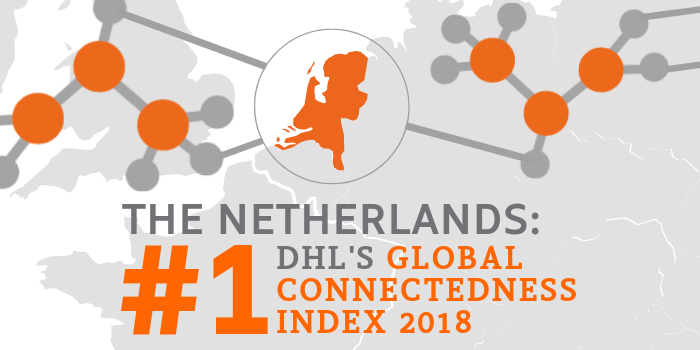 The Netherlands is the world’s leading connected country. The Dutch retain their lead over Singapore, Switzerland, Belgium and the United Arab Emirates, according to the Global Connectedness Index (GCI) ranking list of DHL. Released annually, the GCI provides a detailed analysis of the state of globalization around the world by comparing 169 countries worldwide. The Netherlands also topped the list in 2016.

The Global Connectedness Index measures the current state of globalization, as well as individual rankings for each country, based on the depth (intensity of international flows) and breadth (geographical distribution of flows) of countries’ international connections. The Netherlands is, leading the list, praised for its deep integration of global trade and links to many different countries.

In the center of a leading cluster

The Netherlands is part of the world’s leading connected cluster: Europe, as eight of the top 10 most connected countries are located there. Europe is doing particularly well in the fields of trade and people flows. North America, the leader in capital and information flows, ranks second among world regions, followed by the Middle East and North Africa in third place.

With its logistics infrastructure and central location in the heart of the European Union, the Netherlands gives companies unparalleled access to the continent and beyond. By, rail, road or water, companies can reach 160 million consumers within 24 hours of Amsterdam or Rotterdam. Holland is home to major logistics companies like Cisco, Flexport and DHL. In fact, Holland is the true gateway to Europe and home to an abundance of European and regional distribution centers across a multitude of industries like agri/food, fashion and medical technology.