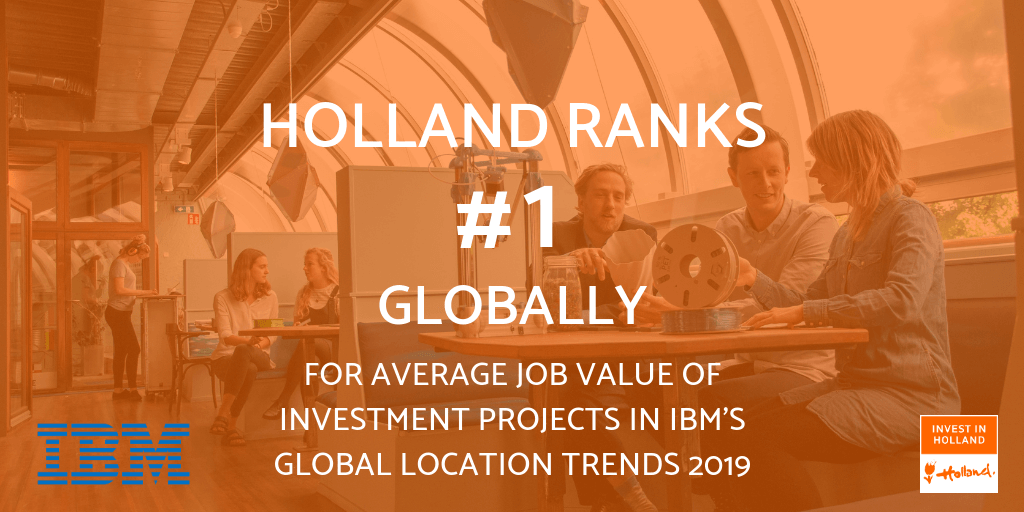 The Global Locations Trends 2019 Report, released annually by IBM, reports the Netherlands ranks number 1 globally for the average job value of investment projects.  This is the first time that this ranking is led by another country than Ireland. The Netherlands moved up from 6th place in 2018.

Value Indicator for quality of jobs

In many countries, it is not only the number of jobs from FDI that is important, but also the type of jobs. More specifically, many countries are primarily interested in attracting higher-value investment projects that create high-paying and/or knowledge-intensive jobs. To this end, IBM-PLI developed an FDI Value Indicator that assigns a value to each investment project, depending on sector and type of business activity.

According to IBM, on this measure, the Netherlands has moved to the top position globally, after receiving significant investment in ICT and Life Sciences and Health.

The IBM report states that it is of interest to note that the Netherlands saw an overall reduction in the numbers of FDI jobs received after three very successful years. However, the recent investment is more concentrated on higher-value segments.

In the IBM report, the Amsterdam/Rotterdam metropolitan area ranks third in the world for the number of investment projects, after a moderate increase driven by more investment projects in the ICT sector. Paris, London, Singapore and Dubai make up the remainder of the top five of this ranking.

The Netherlands as investor abroad

In 2018, the majority of ‘foreign’ jobs were created by companies from the United States (although declining), Germany and China. The Netherlands ranked 12th worldwide for foreign investment measured by number of jobs.

IBM’s annual Global Location Trends report presents and analyses the latest developments in corporate location selection around the world. The analysis is based on real life decisions made by companies about where to establish new operations or expand existing business around the world.