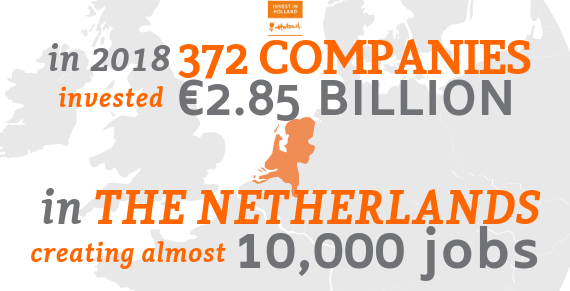 A total of 372 foreign companies such as Giant, Timberland and DAZN generated 9,847 additional jobs in the Netherlands in 2018. Collectively, these companies contributed 2.85 billion euros to our economy. These jobs and investments are credited to the Invest in Holland network, which consists of the Netherlands Foreign Investment Agency (NFIA) – the investment promotion agency of the Dutch Ministry of Economic Affairs and Climate Policy – its regional partners, and the Holland International Distribution Council (HIDC). In the previous year, 2017, 357 companies invested 1.67 billion euros in our country.

Minister Wiebes of Economic Affairs & Climate Policy: “These results once again confirm that foreign companies are important to our globally operating country. Around one million people work for foreign companies in the Netherlands and an additional half-million work indirectly for these companies as suppliers, particularly in SMEs. Due to the growing international uncertainty surrounding Brexit and changing global trade policies, the importance of a good Dutch business climate for all of us is continually increasing.”

The work of the NFIA falls partly under the responsibility of the Minister for Foreign Trade and Development Cooperation, Sigrid Kaag: “The impending Brexit and tensions around international trade provide opportunities for Dutch companies. Our companies are innovative, flexible and adapt to this changing market. Furthermore, the Netherlands’ position as a stable economic hub is also attractive to foreign companies. This position will only be further strengthened. It is positive that this is reflected in the approximately 10,000 newly-created jobs in 2018.”

From headquarters to R&D

The NFIA is responsible for 8,475 out of the 9,847 jobs created by the Invest in Holland network. In 2018, the NFIA managed to attract 248 foreign investment projects to the Netherlands, which collectively account for 2.76 billion euros in investments. The annual results also show that the majority of new jobs are created within headquarters (2,259), followed by marketing & sales offices (1,834), distribution centers (1,053), service centers (977), production sites (884) and R&D locations (755). As illustration, sports media company DAZN established a development center in Amsterdam, Giant and Timberland expanded their European distribution locations (in Lelystad and Almelo respectively) and Mitsui Chemicals committed to producing plastics at the Chemelot Campus in Limburg.

In 2018, the Invest in Holland network brought 42 companies to the Netherlands as a result of Brexit, accounting for 1,923 jobs and some 291 million euros in investments. Companies signaling expansion of their offices in the Netherlands partly due to Brexit , include the Japanese investment bank Norinchukin and media company TVT Media. Financial services providers MarketAxess and Azimo, and maritime insurer UK P&I all announced office openings in our country last year,  due to  Brexit as well. The relocation of the European Medicines Agency (EMA) to Amsterdam, also supported by Invest in Holland, is included herein. In 2019, several companies, including Discovery and Bloomberg, have already announced their intention to invest in the Netherlands because of Brexit.

The number of companies relocating activities to our country due to Brexit has grown compared to 2017, during which 18 companies made a Brexit-related move to the Netherlands. Additionally, the NFIA is talking with more than 250 foreign companies considering setting up operations in the Netherlands following Brexit. These are predominantly British companies, but also American and Asian organizations that are reconsidering their current European structure due to uncertainties caused by Brexit. These include companies in the financial sector, media and advertising, life sciences & health and logistics. In addition to the Netherlands, these companies are also investigating options in other countries, including Germany, France and Ireland.

Since the establishment of the Invest in Holland network in 2015, the NFIA and its regional partners have attracted 1,402 companies to the Netherlands. This has resulted in a total direct inward investment of 8.1 billion euros and the creation of more than 43,000 jobs in the Netherlands. In addition to the NFIA, the Invest in Holland network comprises the regional development agencies: NOM, Oost NL, North-Holland North, amsterdam inbusiness, InnovationQuarter, The Hague Business Agency, Rotterdam Partners, Invest Utrecht, BOM, Invest in Zeeland, LIOF and HIDC.