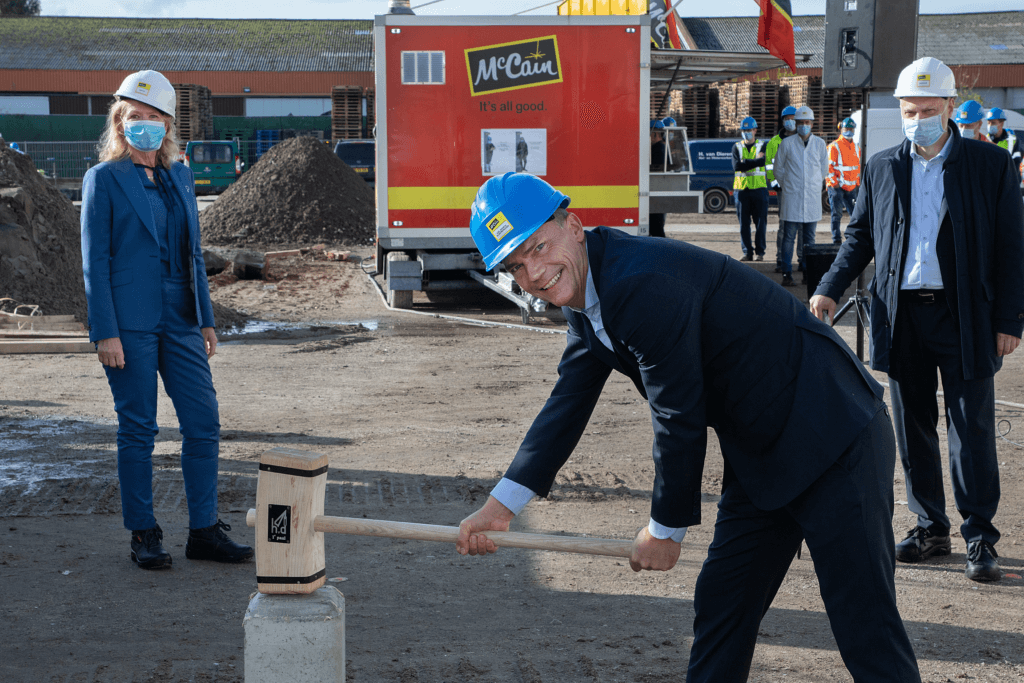 The start of construction was signaled by Lelystad’s Alderman for Economic Affairs, Janneke Sparreboom, together with Erwin Pardon, CEO of McCain Europe, and Luc Geurts, manager of McCain’s Lelystad facility

Canada-based McCain Foods has broken ground on an expansion project at its Lelystad manufacturing facility located in the Dutch province of Flevoland. McCain, the world’s largest manufacturer of frozen potato products, is investing €65 million to increase its Lelystad production line by 33%.

In 1973, McCain entered the European market and the Dutch agrifood industry with the acquisition of its first plant in Lewedorp. The company further expanded in 1991 to acquire the Lelystad plant. With its new expansion in the Netherlands this year, McCain will be able to meet the demands of the market and increase local employment in Flevoland.

Investing in the Dutch workforce and local community

One of McCain’s top priorities will be to enhance the efficiency of its Dutch operations with a continued key focus on people safety and food safety. The company will add an additional 150 jobs for the duration of the expansion, indicating McCain’s strong commitment to investing in the local Dutch talent pool.

“This expansion provides a profound future for the 250 employees of Lelystad,” said Luc Geurts, McCain Foods’ Lelystad Plant Manager. “In a year in which there has been much uncertainty, our employees see the investment McCain is making for their livelihoods and the Dutch community. Our essential employees are the backbone of McCain and we have deep gratitude for their commitment during challenging times.”

“We are on the lookout for new talent to join us as we are not only investing in a bigger plant and more agile operations, but the future of our people and those of future employees,” added Geurts.

Sustainability commitments are a perfect match for the Netherlands

McCain is committed to producing high-quality products with the lowest possible environmental impact, making the company a perfect fit for the Netherlands’ far-reaching sustainability efforts. McCain will take a strong focus on renewable energy as it updates the current lines at the Lelystad facility. By the renovation’s intended completion date of February 2022, McCain expects to achieve approximately 15% in energy savings. Furthermore, McCain is investigating CO2 reduction opportunities to support the company’s strong sustainability commitments.