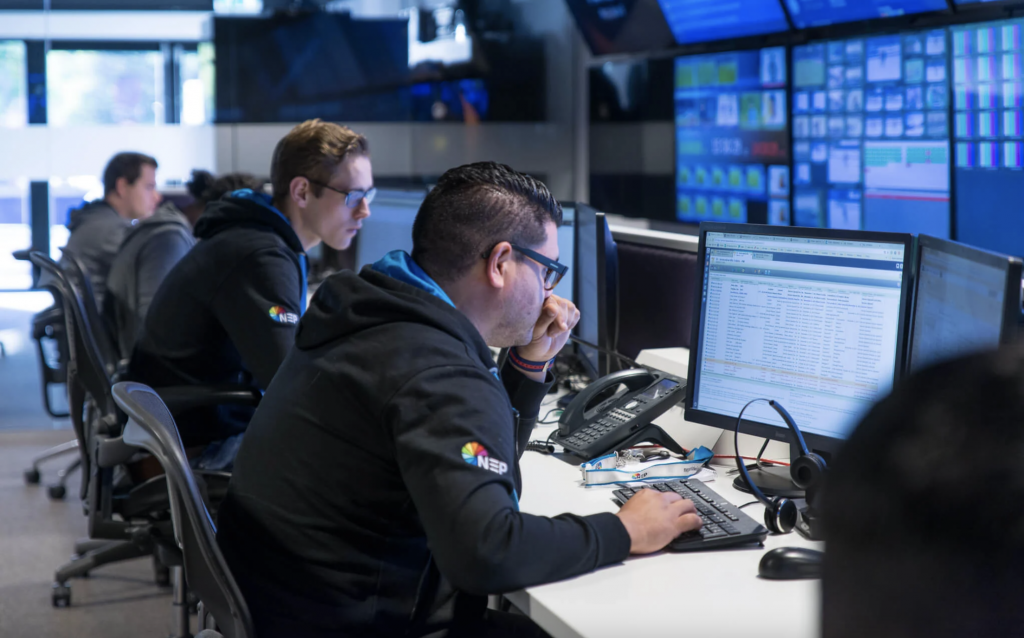 US-based NEP Group has designated its Media Park location in Hilversum, the Netherlands as one of its three innovation hubs worldwide. Having used the Media Park as a global growth hub for years, NEP is now stepping up its investment in the Netherlands – a sign of the company’s confidence that the Dutch media and broadcasting ecosystem offers ample opportunities for innovation and collaboration. The ‘innovation hub’ designation for Hilversum fits into NEP’s new global strategy.

“The essence is that we want to supply the entire ‘end-to-end’ chain – so, from the camera to the screen of the consumer. Actually, this is what we have been doing for some time in the Netherlands,” explained Ralf van Vegten, Managing Director of NEP The Netherlands. “The intention is that we can continue to develop 24 hours a day. We collect the ideas of all the great people we have around the world. And we turn these into products and services that the entire group can benefit from.”

As a rule, NEP’s innovation hubs must have advanced digital infrastructure, such as fiber optics and data centers. In addition, the innovation hubs need to be close to international airports. It’s not surprising, then, that NEP’s choice fell on the Netherlands. “We already have a very good infrastructure here in Hilversum and Schiphol is just around the corner. The Media Park is actually a perfect location for such an innovation hub,” said van Vegten.

Thanks to this infrastructure, NEP is primed for business growth in the Netherlands. The company is poised to accelerate innovation through its product research & development operations in Hilversum. As van Vegten noted, “We can further expand the R&D department. This does not necessarily have to be funded only by the Netherlands. It will be a global investment. So, there will be substantially more money for innovation.”

The Hilversum Media Park has long been recognized as a frontrunner in broadcast technology. According to Van Vegten, this is mainly due to the location’s combination of creativity and efficiency. “There are a relatively large number of creative talents in this market, which is why we make unique TV formats. And if those formats need to be made, then it has to be at a price that is sometimes unrealistic but is customary for this market. So, it is affordable and beautiful. As a result, it simply works very well in the Netherlands.”

None of this would be possible without the support of the municipality of Hilversum, van Vegten emphasized. “The fact that the municipality is so emphatically involved in the well-being of the companies in the Media Park helps enormously.”

The Dutch government and the Invest in Holland Network also played a critical role. Van Vegten emphasizes the important role the Dutch Ministry of Economic Affairs, the Netherlands Foreign Investment Agency (NFIA) and the ROM Utrecht Region have played in convincing the parent company about expanding the team into the Netherlands – instead of Germany or Belgium. “And don’t forget the innovation subsidies. The AI ​​fund, for example, has been a decisive factor in convincing our parent company. The fact that such opportunities exist here in this market helps enormously.”

Furthermore, NEP makes it a point to collaborate with local industry players for collective innovation. “For an ecosystem in which competition plays a major role, I think we actually work together a lot. We are in discussion with many clients, including here at the Media Park, about how we can shape innovation. That’s the nice thing about the Media Park. 60-70% of the Dutch media is located in an area of ​​2 by 2 kilometers. That is a very nice environment for innovation.”

This collaborative approach extends to nearby Dutch knowledge institutions: “NEP has good relationships with the Universities of Applied Sciences of Utrecht and Amsterdam, the University of Twente and with the MBO College here in Hilversum.”